After nearly a month, the intensity in Vietnam started to grate on us a little.  It was time to move on, and slower-paced Laos has proved to be a big lungful of fresh air.  We flew from Hanoi into the capital city, Vientiane, and spent our first five days there.  We didn’t have many plans except to explore the city, relax a bit, and find a gym for Colin.  We did in fact find a fantastic gym about 20 minutes by bicycle from our hotel.  For $6 US each, we had access to the entire facilities for a whole day (weights, cardio equipment, sauna, swimming pool, aerobic classes), plus we were entitled to a one hour Lao massage each.  The bike ride over there was a bit hairy – the traffic is fairly sedate, but it took us a little while to get our heads around riding on the right-hand side of the road.  Negotiating a roundabout near the gym got my heart-rate well up, so I felt more than justified in swanning about by the pool while Colin sweated on the weights.

We were pretty excited about getting our first taste of Lao food.  Colin has actually eaten a fair bit of Lao food in New Zealand with his Lao mate, Arich, so he had some idea of what to look for.  On our first night we walked to the night market and bought all sorts of food from stalls, taking it back to the hotel to eat.  Almost everything we bought was fantastic and devoured within minutes. 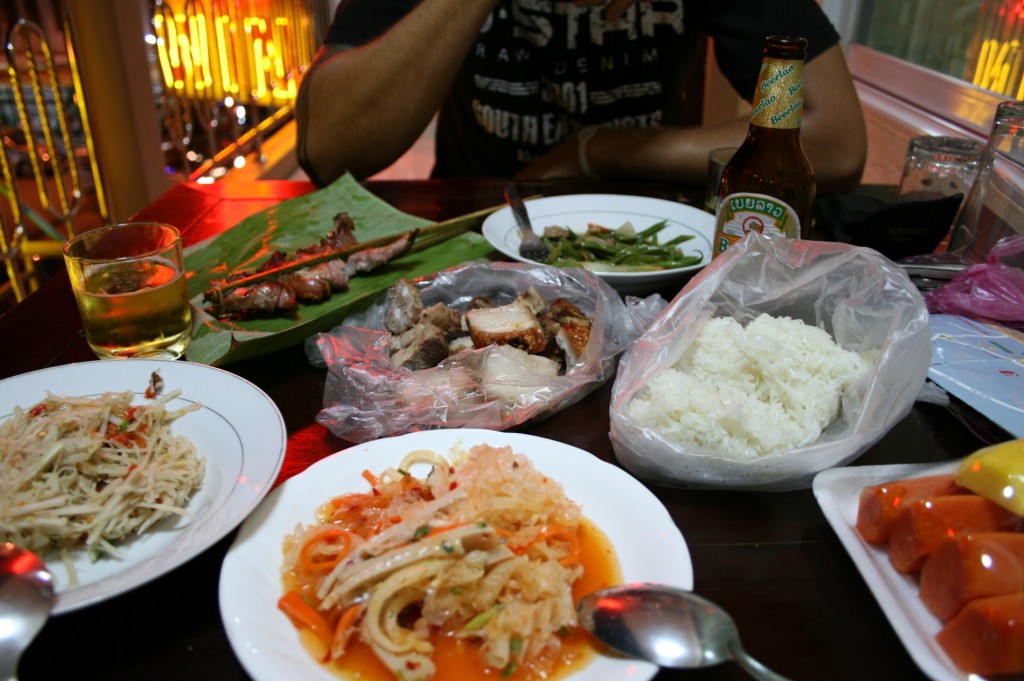 This feast cost us a grand total of $6 US. From left rear clockwise: smokey marinated pork barbequed on bamboo skewers; stir-fried green vegetables; sticky rice; tray of sliced papaya and mango; spicy salad with cabbage and crunchy seaweed; mega-spicy Lao papaya salad; and in the centre, slices of roasted pork. All washed down with tasty Beer Lao.

Vientiane was very hot and humid, and as we’ve found in other places under such conditions, our appetites have been a bit indifferent.  Often, we’ve just wanted something really light, and Noy’s, a great cafe known for it’s fruit shakes, became a regular haunt. 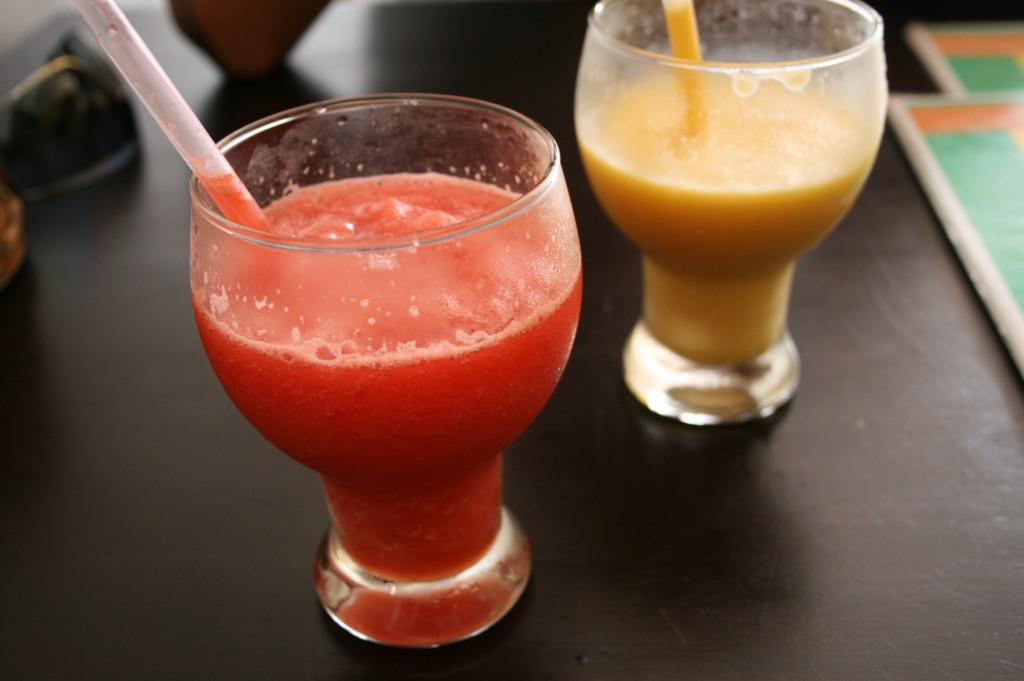 Fruit shakes at Noy’s – these two were watermelon and lemon, and mango, pineapple and coconut. Another fantastic combination was dragon fruit, melon and pineapple. Dragon fruit has white flesh with black seeds and tastes like a mild kiwifruit.

Vientiane is full of bureaucrats – American, French and British accents abound.  The city has many restaurants and cafes that target Westerners, including a famous Scandinavian Bakery.  We stopped into Cafe Croissant D’Or one morning for pastries and coffee, well actually, I had pastries, while Colin went wild with stir-fried vegetables. 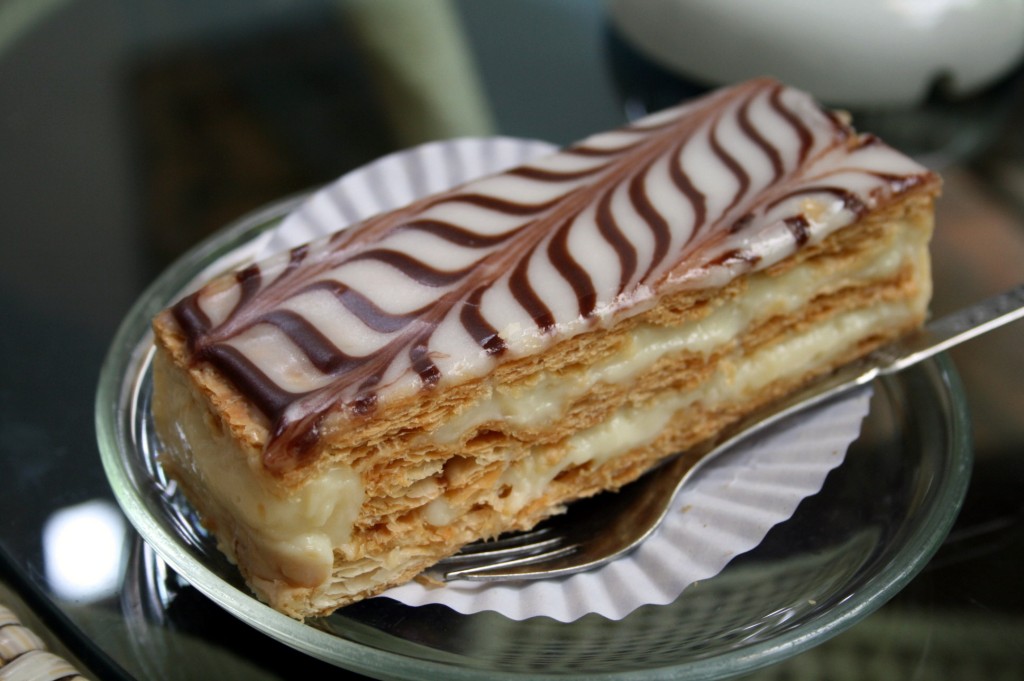 While we were in Vientiane, we met up with Ze Keolaka who works for the Lao Government in the Ministry of Foreign Policy (thanks for the contact Warwick!).  Ze recently spent two years in New Zealand, completing his Masters in Social Policy at Massey University.  It was great talking to Ze to get his perspective on Laos, recent social and economic changes, and what it’s like living and working in Laos.  Ze shouted us dinner at a great restaurant, which specialises in hotpot.  Hotpot isn’t a traditional Lao way to cook, and is more Korean in origin.  Nonetheless, it was still an interesting and novel meal which we enjoyed hugely. 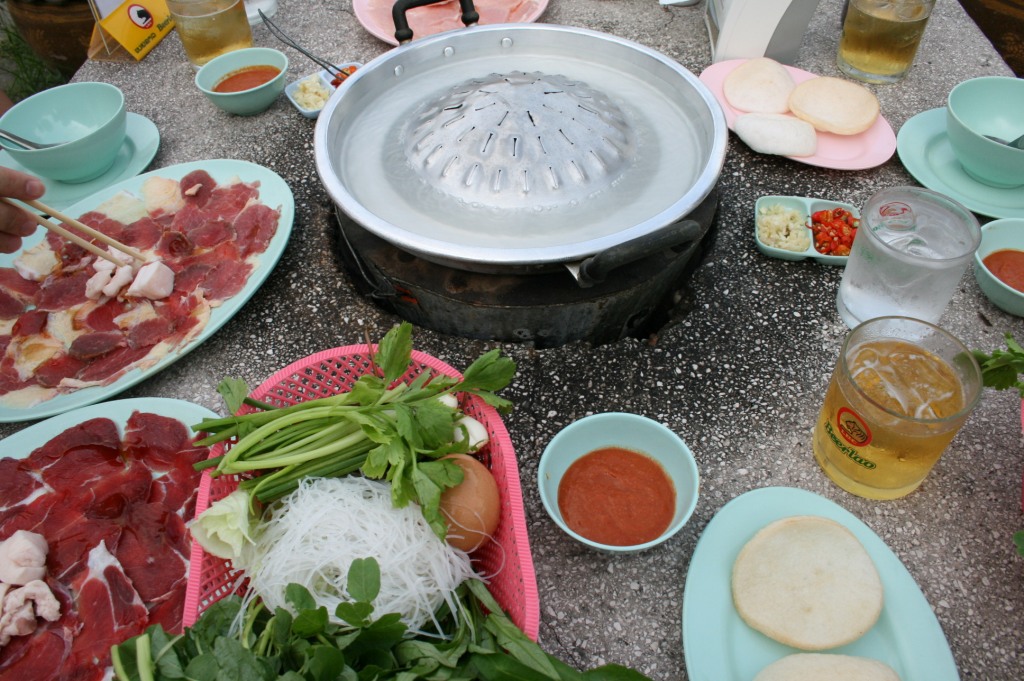 Hotpot – at the centre of a circular table is a barbeque hot plate. The plate has a central dome, on which you cook meat, and a recessed edge, which you fill with hot water. We were supplied with baskets of fresh greens and plates of thinly sliced raw meat. You cook the greens in the water and the meat on the dome. The meat juices run down into the water, and by the end of the meal, a tasty soup has been created.

The green vegetables were probably my favourite part – they tasted so fresh. We also had a type of mild seaweed that we cooked in the water, as well as rice noodles, and whole eggs.  All meat and veges were dipped into a tasty sauce made from peanuts, garlic and chilli.  The white lumps in the centre of the hotplate are lumps of pure pork fat – not skin, just fat.  It was lovely – toasted to a crisp on each side, with the inside still meltingly soft…despite the taste sensation, eating pure fat was a bit terrifying and I could only bring myself to eat one piece.

After an hour or so of leisurely cooking and eating, it’s time for soup.  Thanks for a great meal Ze!