Burmese tea,  how the locals drink it – very strong, and served with sweetened, condensed milk. It reminded me of Indian Masala tea, but without the addition of spices. As in Laos, it was served with complementary green tea.

One of the curiosities of traveling through South-East Asia is that if you enter Thailand over land (as we did, by boat), you are issued with a 15-day tourist visa.  If you fly in, you automatically qualify for a 30-day visa, but if you organise a visa over the Internet before you enter the country, you can easily obtain a 60- or 90-day visa.

We didn’t find out about the 60- or 90-day visas until it was too late, so we were stuck with 15-days.  It is possible to arrange extensions (for a fee) by going to the Immigration Department in Chiang Mai or Bangkok, but in our haste to escape to Pai, we didn’t think about organising this before we left.  When in Pai, we had to make up our minds whether to a) go back to Chiang Mai before the visas ran out, b) wait until we got to Bangkok, and hope that we could organise an extension before they ran out, c) gulp, and pay the fine for overstaying at the airport when we left, or d) make a trip to the northern town of Mae Sai, where we could go over the border into Myanmar (Burma), renewing our Thai visas for another 15 days when we returned.

Clearly, we chose option d.  Many tourists get sucked into the lifestyle in Pai and end up staying far longer than they had intended, so such “visa runs” are common.  It was easy to book tickets on a mini-bus for the 7 hour trip to Mae Sai.  The bus left at 5.30am so that it could do a round trip, returning passengers to their safe little haven (Pai) in the same day.

The trip seemed to pass blessedly quickly, despite being crammed in like sardines and only making two stops.  (I think my absorption in my current read, the “Talented Mr Ripley” trilogy had something to do with this).  At the border, our fellow travelers headed over straight away  as they had about 45 minutes to get to Myanmar and back to the bus.  Colin and I had elected to stay overnight in Mae Sai, so we found our hostel, settled in, and then headed to the border. 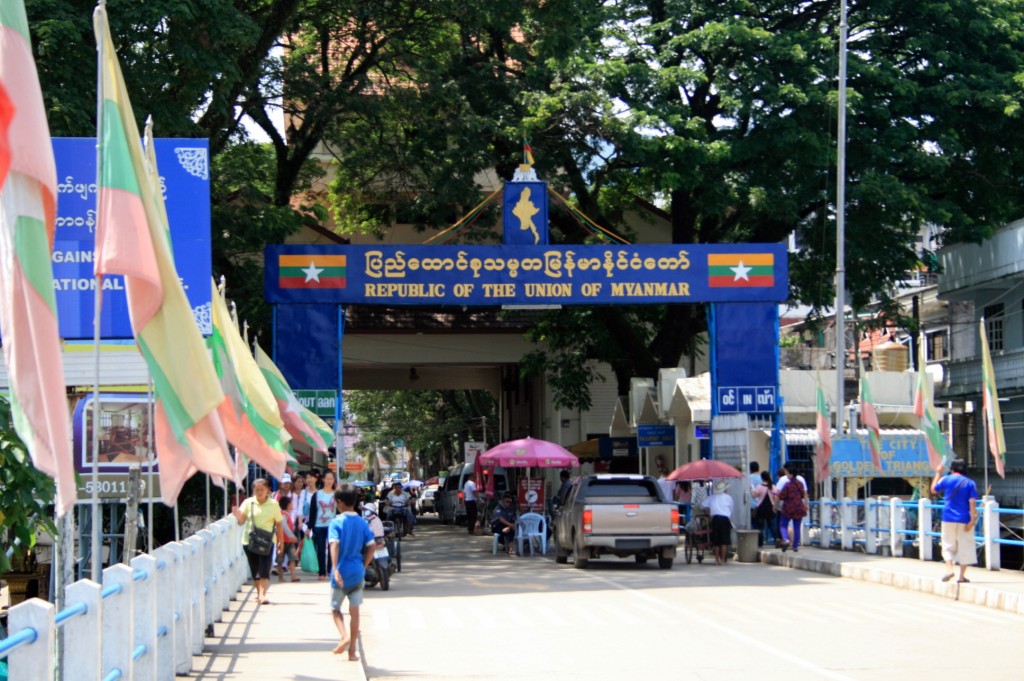 Heading over the bridge, towards the Myanmar border.

The border crossing is very busy, as it is a major trading point between the two countries. Many Thai people (like this woman and her son) visit the town of Tachileik to shop for bargains at the Chinese market. Thai shopkeepers purchase goods in Tachileik because they can more than double their money back over the border. We bought a small bag of cashews in Myanmar for 30 Baht, and later that day, saw a similar size bag in Thailand for 120 Baht. 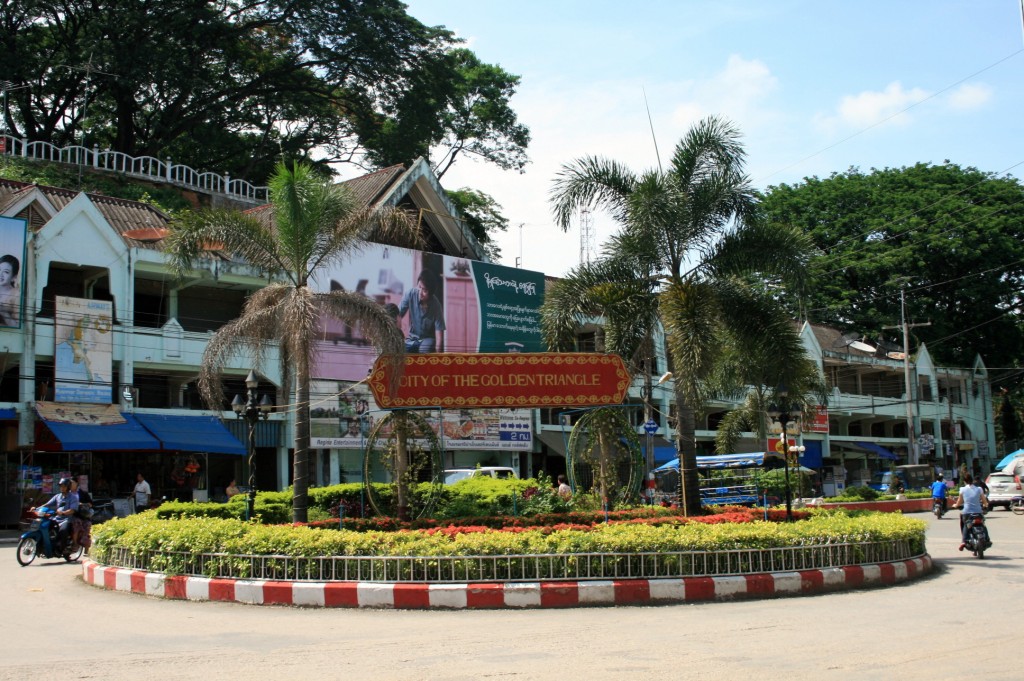 Just over the border, is Tachileik, “City of the Golden Triangle”.

The Golden Triangle refers to the three-country border where Thailand, Myanmar and Laos meet, historically known for its thriving trade in opium. The opium trade is much more heavily policed now, especially in Thailand, but where there is a will, there is a way, and this activity still goes on (although is more centred on methamphetamine now).  The border between Thailand and Myanmar doesn’t exactly pose much of an obstacle for smugglers, as the photo below shows.  The poverty of the hill-tribes in both Myanmar and Thailand, the corruption of authorities, and general lawlessness of this border area also support the drug trade. 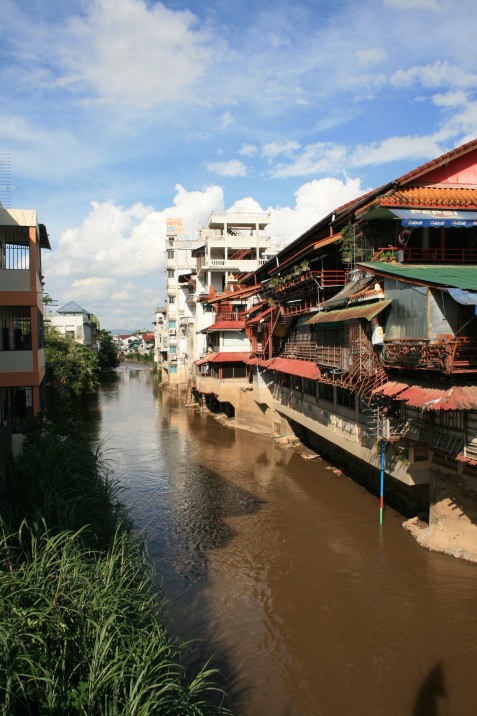 The river Mae Nam Sai, which forms the border – Burma to the left; Thailand to the right.

Crossing into Myanmar involved a stop at Passport Control, where our passports were removed, and we were issued with a permit that allowed us to visit Myanmar for 14 days.  In reality, this permit doesn’t allow you to travel very far into Myanmar without applying for difficult-to-obtain further permits.  For most travelers to Myanmar, applying for a visa prior to flying into one of the two main cities is the safest and most convenient way to travel.

Tachileik is described as “a seedy frontier smuggling and gambling town” in Lonely Planet, and it really is just that.  As we entered the town, I hung back to take a couple of photographs, while Colin was approached by three men vying with each other to ask, “you want woman?  I can take you to woman?”.  When Colin laughed and said he was with his wife, I received embarrassed smiles, although I only discovered the reason for it later.  Seconds later, an older man struck up a conversation with us, wanting to know if we wanted to gamble or buy alcohol.  We declined his offer, but he seemed like such a nice grandfatherly-type, that I asked him where we could buy a cup of the famous Burmese tea.

Danny took us to a tea-shop nearby which he said he frequented every morning.  He then entertained us with all manner of interesting stories.  Danny is a retired marine engineer, who claimed to have invented the hybrid engine, and romantically, had sacrificed marriage and a family for his first love, philosophy.  He spent several years working illegally in America, which is where he developed his excellent grasp of English.  On attempting to illegally enter the US a second time, he was arrested on the beach where his boat landed, jailed, and sent back to Myanmar.

With Danny – a colourful character indeed!  His teeth were pretty colourful too, stained a red-brown from the betel leaves chewed by many people in Myanmar (the leaves are a mild stimulant).

After tea, I agreed to buy a couple of cans of Myanmar beer at a duty free shop (itself the weirdest mix of typical duty-free-glitz set in a background of a dirty, decaying building).  Danny then suggested that I might like to sample some local perfume, which he said was “made without alcohol”.  He took me to a shop and I actually did purchase a small bottle because it smelt lovely, and cost only 27 Baht, just over $1 NZ.  While there, I asked the proprietor if she could give me my change in Myanmar Kyat, as I have saved a small amount of local money from every country we have visited.  The Baht is actually the currency of choice in Tachileik, but I was given a 50,000 Kyat note as a souvenir (equivalent to about 2 Thai Baht, or  less than 10 cents NZ).

After we left Danny with a generous tip, we decided to spend some time looking around the market.  Colin’s “same, same, but different” Prada sunglasses that he had bought for a few dollars in Vang Vieng had collapsed while crossing the border, so he was ripe to be pounced upon by two young men at a sunglasses stall.  While Colin modeled glasses and joked with them, two other men tried to sell me cartons of cigarettes, and then (with a twinkle), Viagra.  This caused a lot of laughter and jokes, with the men highly amused when I pretended to misunderstand, and then to be shy.  They had both “Indian” Viagra, as well as “genuine” Viagra, and even a potion that they claimed was “Lady Viagra”, which depicted a scantily clad vamp on the box.  Colin soon got in on the action, and his animated portrayal of why he didn’t need Viagra caused raucous outbursts (if you know Colin, you get the picture!).

Colin with his new sunglasses. The two young guys ran the sunglasses stall, but the man on the left was just a random who got in on the fun. The cigarette and Viagra sellers declined to be in the picture, claiming (I think) that it was illegal for their wares to be photographed.

After this, the man in the left of the picture showed us around the market.  A bit like Danny, he just somehow became our guide.  He too was full of interesting stories, and had a beautiful smile and gentle manner.  He was also clearly poor, and we knew he would probably ask us for money at some point.  We spent a pleasant hour with him, wandering through the markets in the sun, sampling little potato samosa from a stall (very delicious), and chatting to stall owners.  It was handy having a local guide so we could find out more about the more unusual items for sale, such as dried tiger intestine and deer heart (both used for medicine).

Around 4pm we decided we should head back to Thailand in plenty of time before the border closed (taking into account also, that Myanmar is half an hour ahead of Thailand).  We said goodbye to our guide after giving him some money, which he claimed he needed to bribe an official so he could get into Thailand to work.  In the market we had encountered quite a few beggars, and there were many more as we walked back towards the border – lots of elderly men and women, people with serious physical disabilities, women with young babies, and lots and lots of kids.  We were soon completely cleaned out of coins and small notes, and it was hard saying no to the final few we passed.  Myanmar has one of the least developed economies in the world, and there were far more beggars here than anywhere else we have visited.

At the border, our passports were returned, then we had to pass through Thai immigration again.

Back in the Thai town of Mae Sai, which was  obviously more affluent than Tachileik.

After wandering through the stalls on the Thai side of the border for a while, we took a tuk-tuk back to our hotel and went in search of dinner. Bed wasn’t too far away, as we were tired from an early start to the day, and several hours walking around in the hot sun (Pai had been much cooler).  Unfortunately, we had a very broken nights sleep due to a loud karaoke bar across the street…

The next day we ate something disgusting that resembled breakfast, then caught a local bus for the 90-minute trip to Chiang Rai.  On route, the bus was stopped twice by armed Thai police, who first searched passengers for illegal items, then the second time, examined their identity cards.  At the second checkpoint, a young Burmese man was removed from the bus.  Colin and I weren’t searched or questioned at either point, which felt unfair.  In fact, the only attention we got was when a woman police officer wanted to have a look at Colin’s tattoos, which she said were “beautiful”.  A bit surreal, given that her Glock was only inches away from us!

As many of you know, Colin and I have seriously considered extending our trip by another month or so.  If we had, we would have gone to Myanmar.  We’ve stuck to our original three-months for several reasons, the main one being that the monsoon will be in full force in Myanmar in June, July and August.  But I’m happy that I got to go to Myanmar after all, even if it was only for a few hours.  It definitely whetted our appetites… 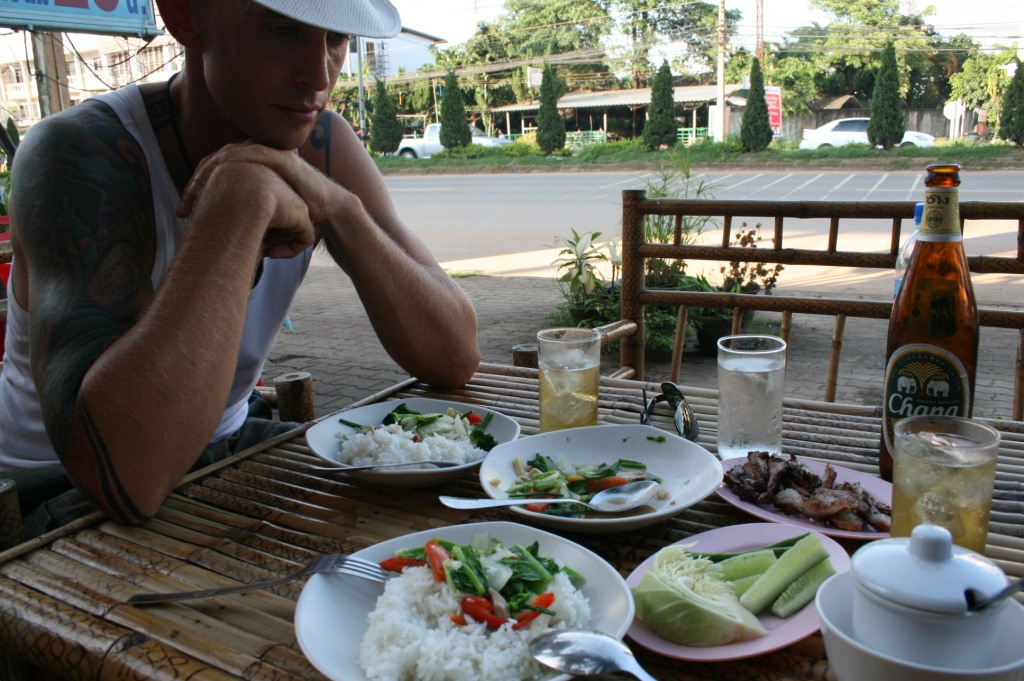