On my first day back at work after Christmas, to ease the pain of thinking, I looked up all the public holidays for 2013 and entered them into my calendar.  Yet while I’m already anticipating a fulfilling 2013, I find that I’m not quite ready to say goodbye to 2012.  Although it couldn’t be as exciting as our amazing 2011, 2012 still had a lot going for it.  It was our first full calendar year living in Brisbane.  We’re embedded now, no longer fresh off the boat, and running out of “firsts”.  We know people.  We know where to get good coffee.  We wouldn’t be caught dead saying “esky” or “thongs”, but we’ve discovered well and truely that we like living across the ditch.  As far as years go, 2012 was a nice effort.  These are a few memories I collected along the way, one photo for each month.

January: Yayoi Kusama exhibition at the Gallery of Modern Art.  We saw Kusama in 2009 in Wellington, but were keen to descend once again into her Alice-in-Wonderlandish imagination.  This photo was taken in The Obliteration Room which originated as a totally clean space, with all the furniture and walls painted white.  Sheets of colourful round stickers were supplied for the public to place wherever they wished.  By the time we visited, the stickers were several layers deep.  (See here for before and after photos, and a time-lapse video.)

February: Davies Park market in West End, where we could be found most Saturday mornings during 2012.  This photo was probably taken while waiting for a breakfast pita pocket, still my firm favourite of all the delicious food on offer.  There are markets everywhere throughout Brisbane, and I keep thinking that we should try a different one sometime, that we’re getting too predictable.  Maybe we are, but there’s a pleasure in the familiarity of buying vegetables from the same vendors, goat cheese from the same French woman, bread from the same artisanal baker.  I even geekily love the early morning bus ride to get there.

March: 2012 found us getting out of the city most weekends to explore the surrounding countryside.  This photo was taken at the Phoenix Sculpture Garden near the summit of My Glorious.  Graham Radcliffe is a prolific sculptor, using marble, stone and bronze to create gorgeous organic pieces; often purely abstract, but just as often reminiscent of shells, skeletons, bodies and birds.  We spent several hours chatting to Graham, wandering his beautiful garden in the bush, and playing with his dog, Merlin.  Laminated quotes are pegged on string throughout the garden – one that has stuck with me is “creative minds have always been known to survive any kind of bad training” (attributed to Anna Freud). 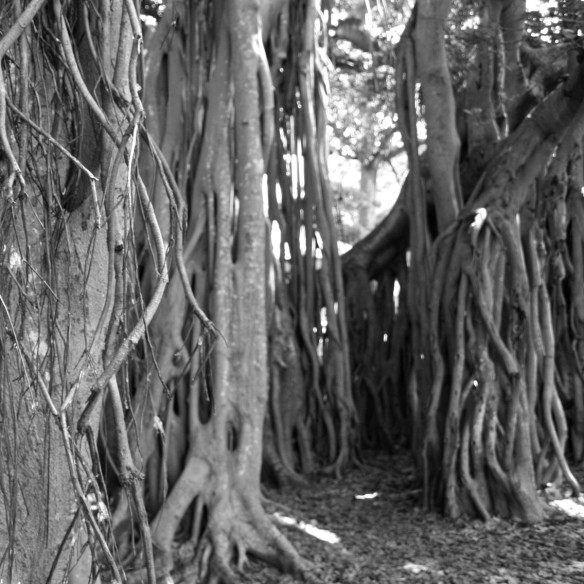 April: By April the sweltering Brisbane summer was beginning to cool, and it was pleasant to lounge around outside again.  This photo is of the roots of a large banyan tree in the City Botanical Gardens, taken during a lazy afternoon of walking and lying on the grass to read in the sun.

May: In May we travelled to Byron Bay for a long weekend in the hinterland.  On the way down we avoided the highway and committed to a slow trip along the winding coastal roads.  That day was uncharacteristically overcast, but Tweed Heads (where this photo was taken) glowed softly with the most breathtaking light.

June: This photo doesn’t really depict “June”.  It could have been taken at any time.  But June is always our month, since it contains both our birthday’s.  This photo just says how nice it is to wake up to this man’s back each morning, knowing I’ll get to see it again tomorrow.

July: In July we celebrated the anniversary of our arrival in Brisbane with a stellar party and a Tiramisu Cake that turned out so good that I keep wondering if I could get away with a second anniversary party in July 2013 (alas, I suspect that could be stretching the concept a little too far).  In July I also ate the best apple of my life; a truely astounding experience.  I later cooked more of these apples into the most delicious apple cake I’ve ever tasted, but not without a little drama along the way.  (Hmmm, July was a good month for cake.)

August: August was for hibernating, recovering from two months of being unwell with early nights and lentil soup.  It was also the month for an indulgent long weekend in Maleny where this photo was taken.  I almost didn’t post this photo; it’s almost too precious to share.  But it captures the mood of this month so well that I can almost will myself back there into that calm and cosy cocoon.

September: Riverfire – the fireworks festival marking the end of the annual Brisbane Festival.  September was an especially social month, with parties and dinners and coffees.  This photo was taken from the balcony of a friend’s apartment in Southbank after a vegetarian feast.  September was also the month that I finally got back into a regular yoga practice and discovered all over again that yoga just makes life better.

October: I’ve experimented with all sorts of eating styles over the years (vegetarianism, a short stint of veganism, rampant junk-foodism, and most recently, dairy- and additive-free), but I’ve never been one to restrict myself for too long.  I’m just too interested in flavours to risk missing out on an experience.  In October though, I instituted a practice of avoiding sugar during the week.  This had the unexpected (but excellent) effect of ensuring that I saved myself for a few high quality treats on the weekend.  This Lime Tart from The Deli in Bulimba, was one of them.

November: November was a great month because it involved a trip back to New Zealand.  This photo is of that quintessentially kiwi icecream, Hokey Pokey, bought from a quintessentially kiwi icecream shop at Pokeno.  To the right in the background, Colin is holding another kiwi favourite, Orange Chocolate Chip.  On this particular day we met up with Kerri and Stuart and their beautiful girls, Jorja and Pippa, for fish and chips and then, icecream (no sugar during the week doesn’t count on holidays, public holidays, and, so it seems, the first two weeks of January). 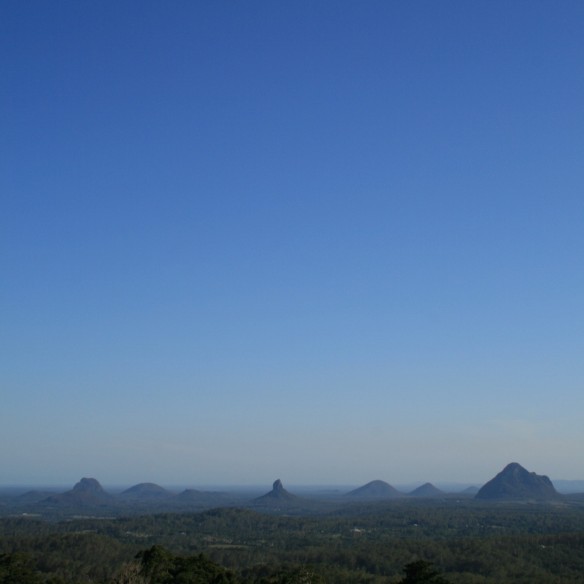 December: I cheated for this photo – it wasn’t taken in December.  I took almost no photos in December.  This photo was taken in late November when my sister Amy came to stay for a few days.  It was a beautiful day, and we had swum at Coolum Beach, lunched in Montville, and stopped to see the Glasshouse Mountains on the way home.  It was so much fun showing Amy around.  I even managed to send her home with a hangover, which is either “bad big sister”, or “job well done”, I can’t quite decide which.

Thanks to all of you for reading Chez Moi in 2012.  Happy New Year!