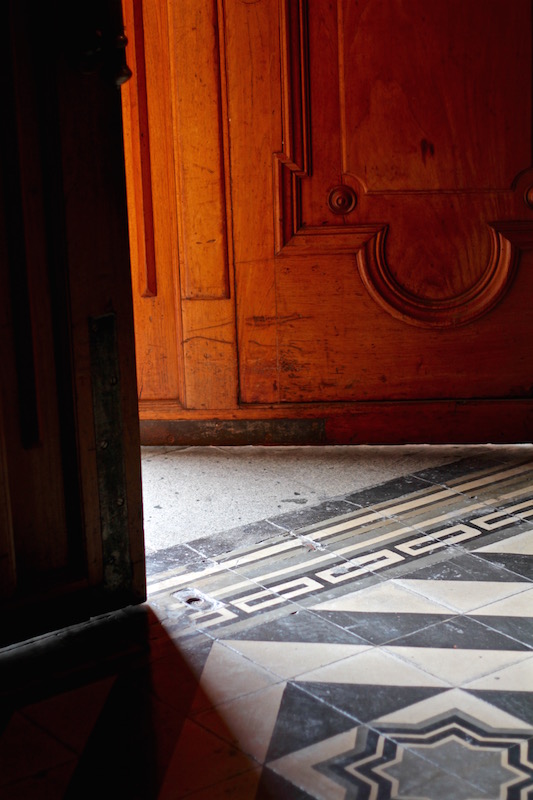 We flew into Santiago in the early afternoon after a dark night suspended over the Pacific Ocean. Our breakfast had just been cleared and then all of a sudden the plane dipped below the clouds revealing the towering Andes Mountains and the city sprawling at their feet. A short taxi drive later we arrived in the CBD and checked into our hotel. We had been given a room on the 22nd floor: “the penthouse”, we joked with staff; but the joke was on us, as the room turned out to be shabby and poorly cleaned with a pungent smell lurking in the hallway outside. Thankful that our long flight was over, we decided to overlook these discomforts and soak up the amazing view from the tiny balcony: 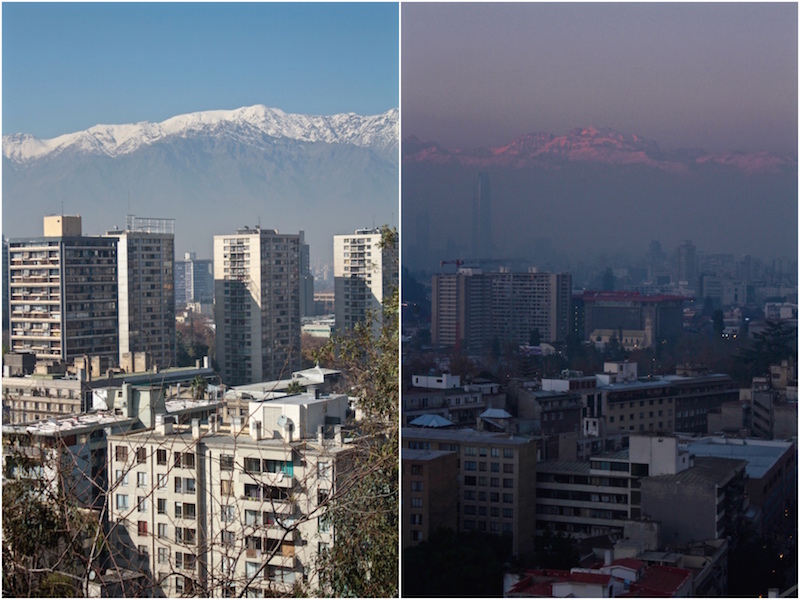 After a short rest we headed out into the streets to explore.  We ordered large coffees and then wandered about, taking in the feel of new city streets and unfamiliar faces. We soon found ourselves in the main square, Plaza de Armas, which bustled with locals on their way home from work. A crowd had gathered around a pair of dancers; a young huaso (cowboy) wearing a poncho and hat, whose formal movements were answered gracefully by his parter, a woman wearing jeans and waving a white handkerchief (cueca – Chilean folk dance). It wasn’t until the dance ended and the woman kissed another man that we realised she wasn’t officially part of the act, but a stranger pulled from the crowd.

The sun was low and the temperature falling so we decided to head home. We thought we knew the way back (the streets are organised in a grid after all) but we spent a good hour trying to reconcile our tourist map with the landmarks etched into our memories. We were cold and hungry by the time we found our hotel but restaurants typically don’t open until 8pm or later. At a supermarket nearby we stocked up on fruit, crackers and a bottle of Chilean red wine, which I soon spilled all over the bed. One bar of soap later, wet sheets were draped all around the room, but then…finally, the Japanese restaurant across the street was open and we were face down in bowls of steaming udon soup. 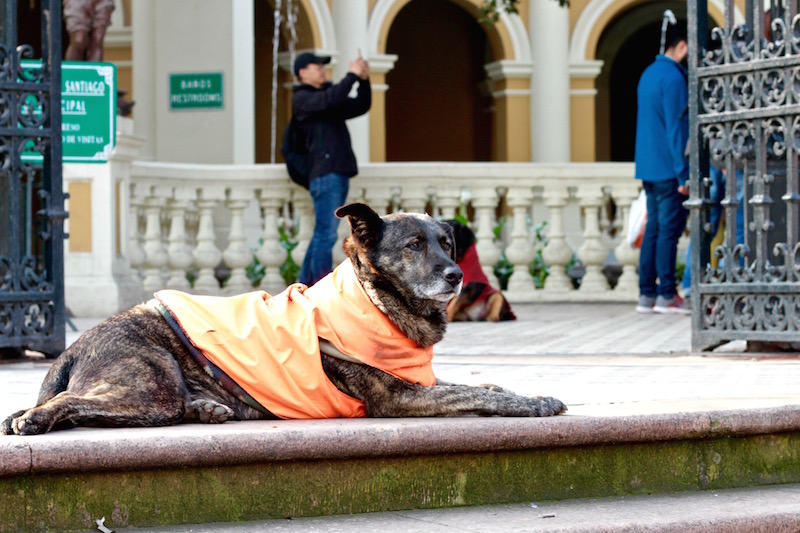 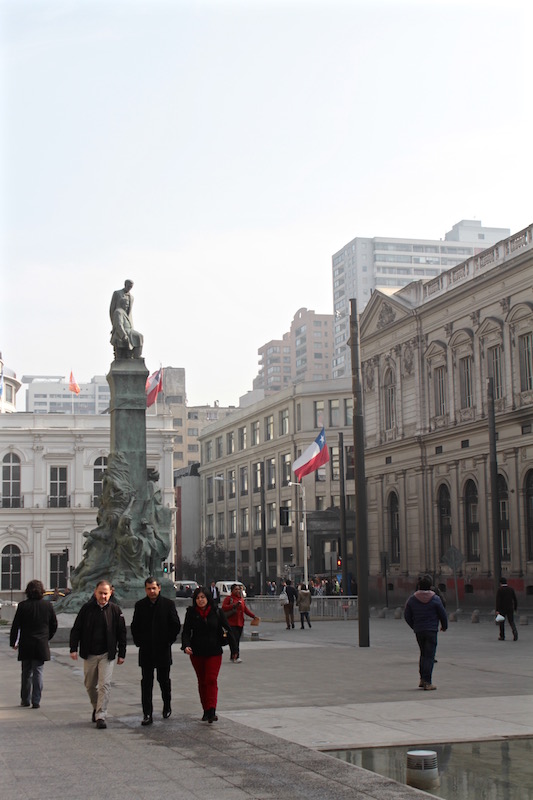 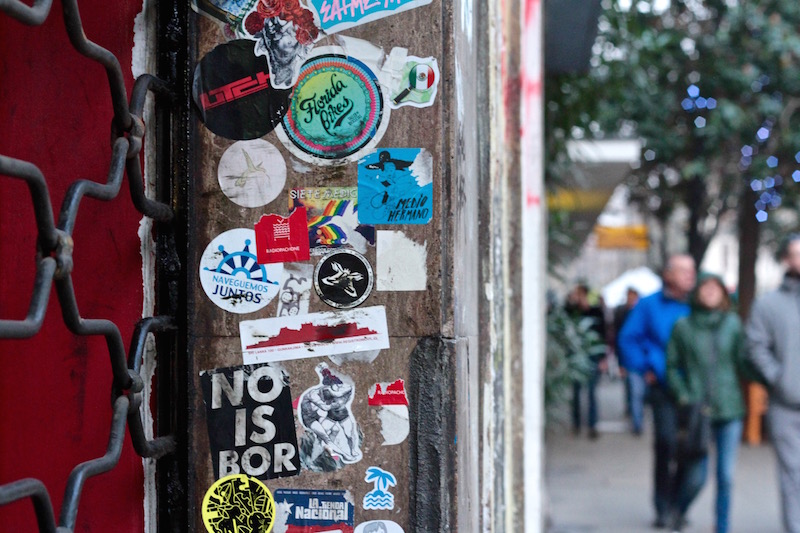 After a sleepless night we headed out for breakfast then met up with Chloe from Foto Ruta whom we had booked for a photographic tour of the city. For the next few hours we enjoyed the warm winter sunshine as Chloe dispensed creative tips and local knowledge in equal part. From Chloe we learned how to buy still water (sin gas, not con gas) and why many of the street dogs wore little jackets (a local charity funds this every winter). At the end of the tour we sat in a cafe with glasses of wine while Chloe critiqued my photos, drawing attention to many little habits that I hadn’t noticed before (like forgetting to ensure that my shots are straight!). It was a beautiful day and the tour was a perfect, relaxing way to get our bearings and learn about the city. Some of my favourite shots from the day include: 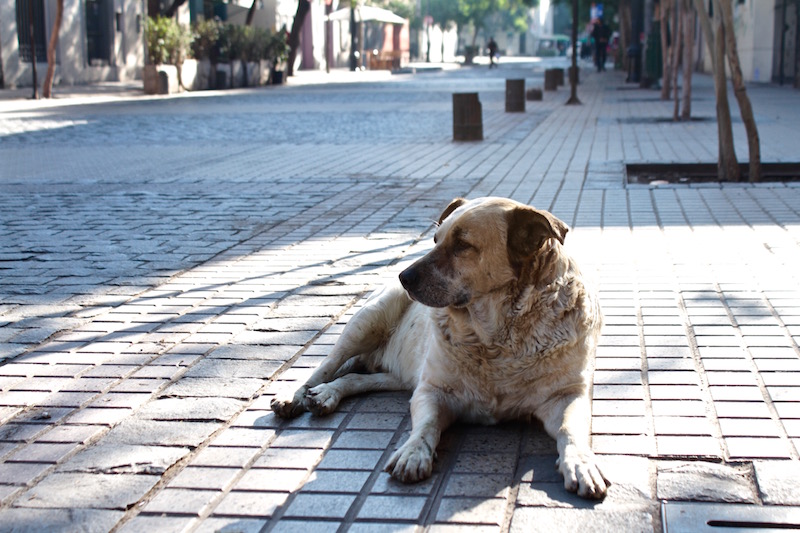 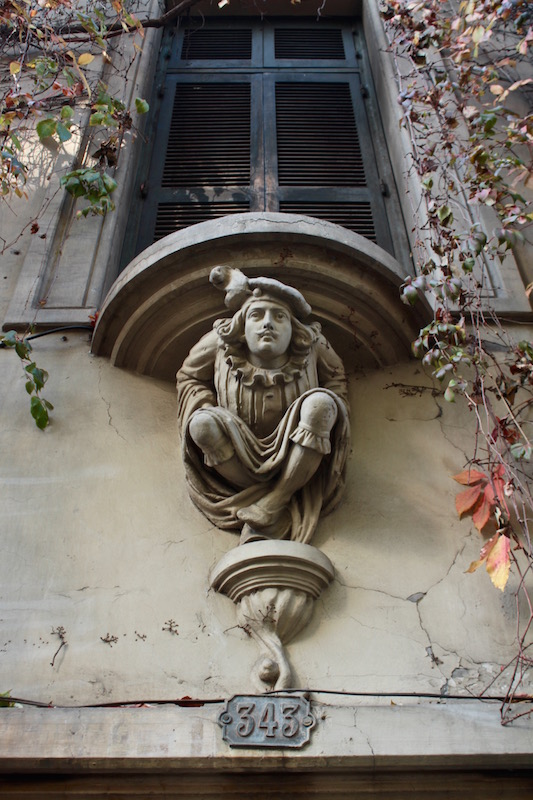 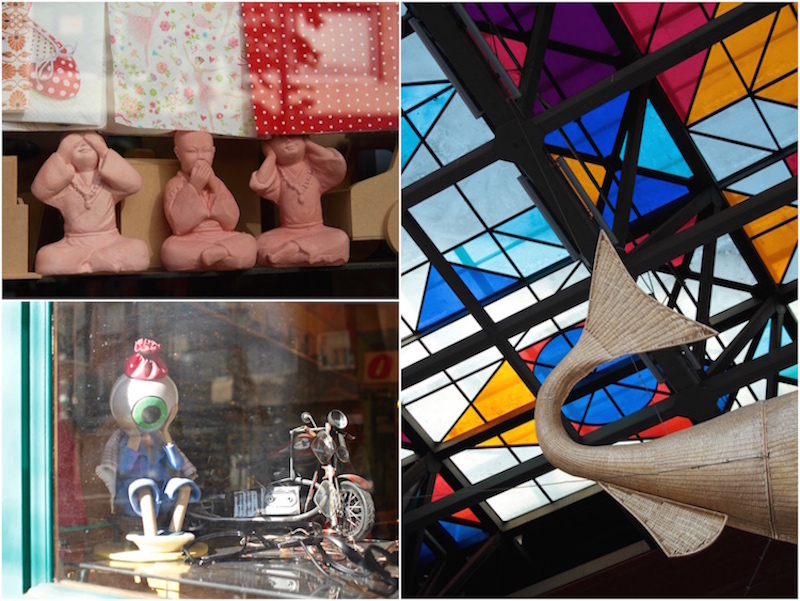 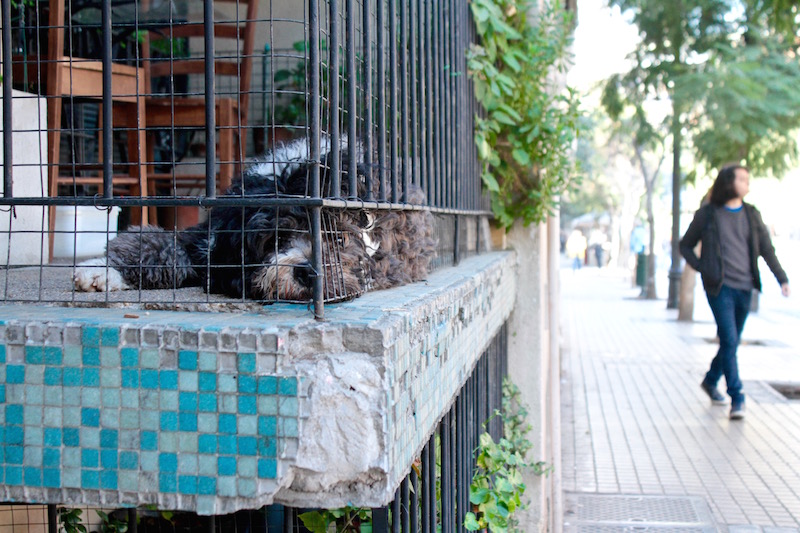 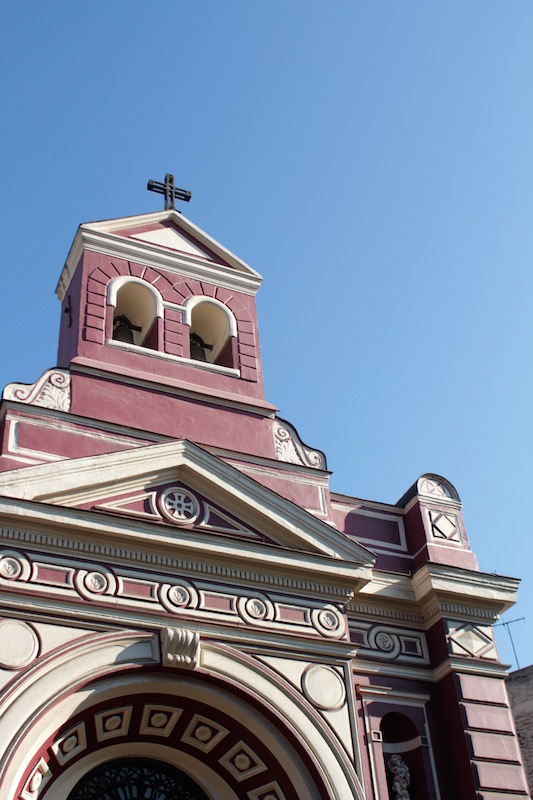 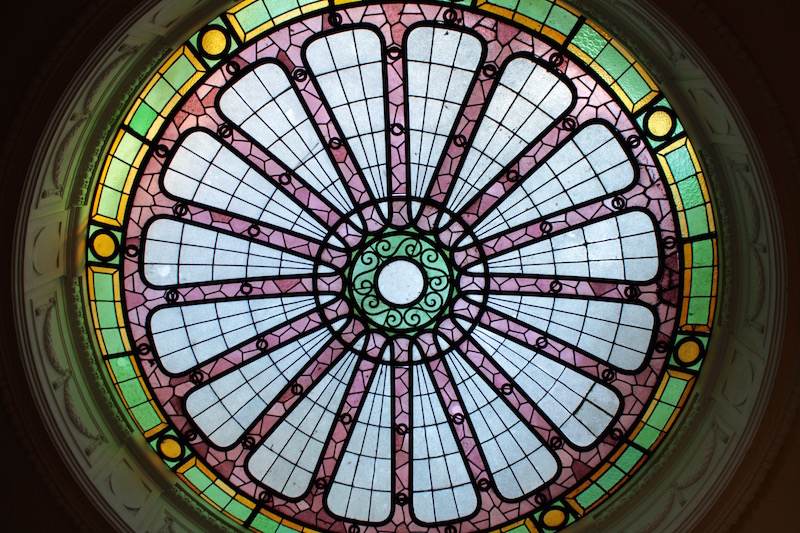 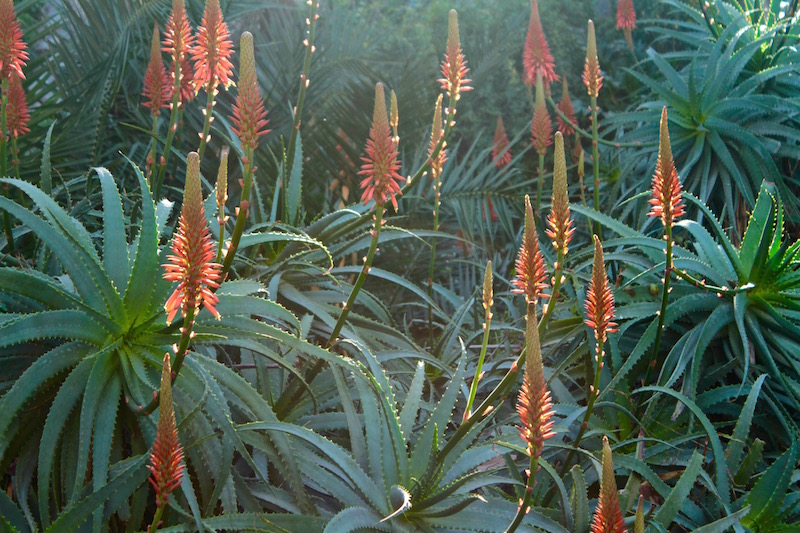 Later that night we headed to the Costanera Centre in Providencia to meet up with Marta and Werner (we had met Marta five years earlier when travelling in Halong Bay, Vietnam). We enjoyed a fantastic dinner at the Peruvian restaurant, Tanta, sampling ceviché (raw fish), octopus with fried potatoes and pesto, an outrageous dessert platter, our first pisco sour (the first of many), and delicious Chilean Carménère. That night Chile beat Mexico 7-0, winning the semi-final of the South American football championship. The taxi ride home was punctuated with cheers and tooting horns, as the locals took to the streets to celebrate.

After that first day, Santiago was enveloped in dense smog which prevented our planned visit to Cerro San Cristóbal, the steep hill in the centre of the city. Instead, we roamed about the city, usually with no real plan in mind. We moved to a better hotel (sans stench and dirt), took a half day tour to a winery (more on that later) and a full day tour to the Andes Mountains (more on that later too). It was very cold and we were glad that we had invested in thick winter jackets and scarves, even though the sight of homeless people sleeping on park benches and shivering street dogs invoked the inevitable pangs of guilt. We gradually grew more confident to navigate the streets without a map (well, at least Colin did) and we worked on our meagre Spanish every time we stopped for hot coffee or steaming empanadas. 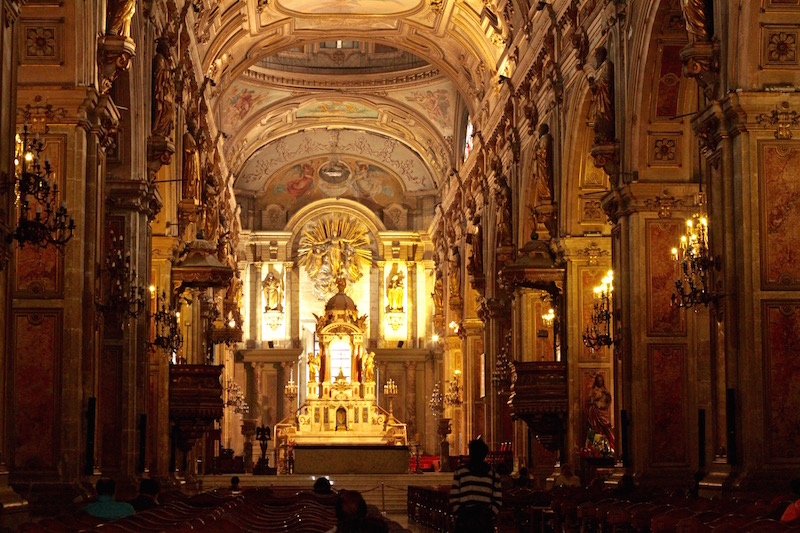 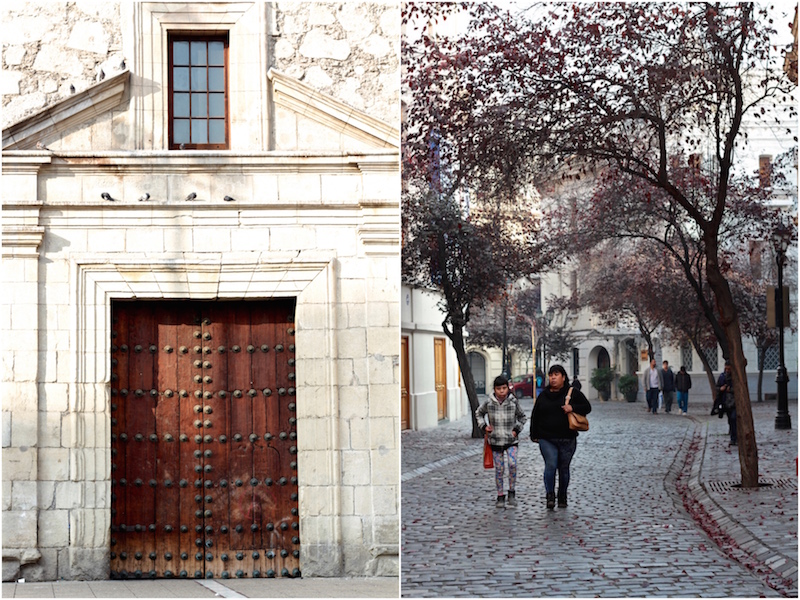 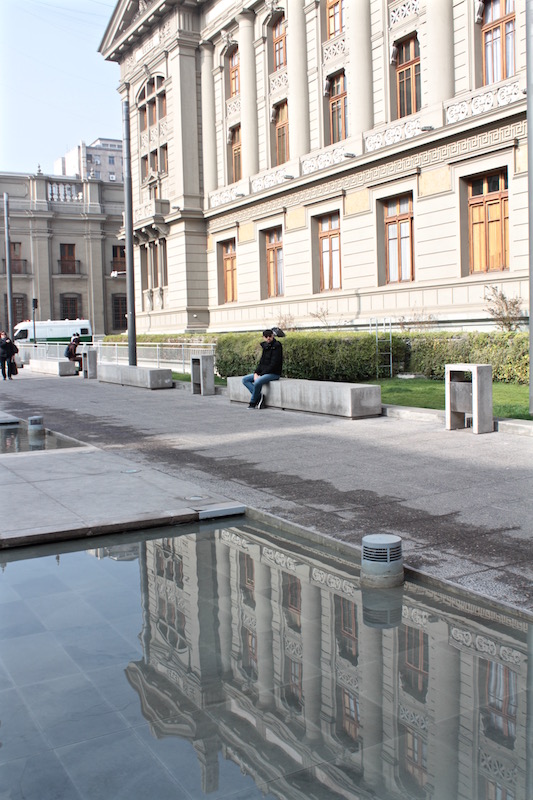 I finally got over my jet lag five (!) days after we landed. Despite my exhaustion, I loved Santiago and wished we could have stayed longer to see more of the sites and museums. The morning after that blissful sleep (the sleep of the dead) we were due to fly out to Buenos Aires. We had a couple of hours to spare and squeezed in a walk around Barrio Bellavista, a bohemian area just across the Mapocho River. It was early for Santiago (nothing really opens until 10am) and we had the colourful streets almost to ourselves, except for a few elderly ladies walking dogs and a friendly chap who offered to sell us weed. All too soon, we were in the taxi heading for the airport, already nostalgic for Santiago de Chile. 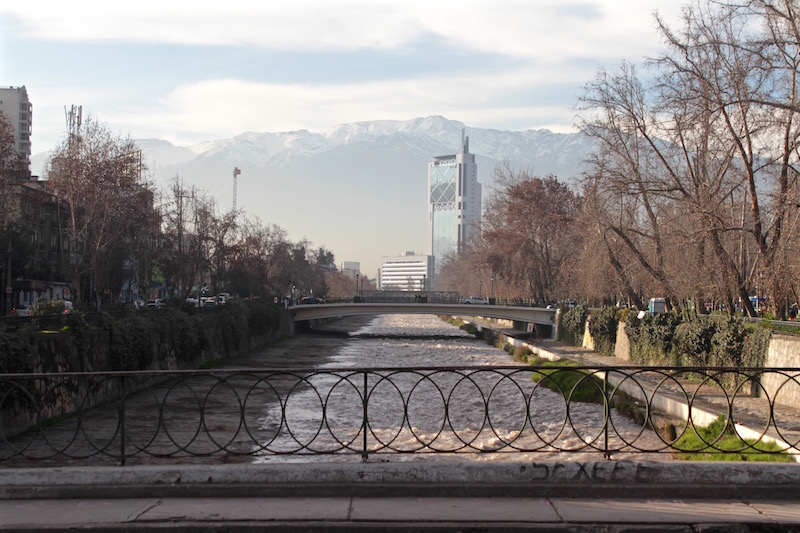 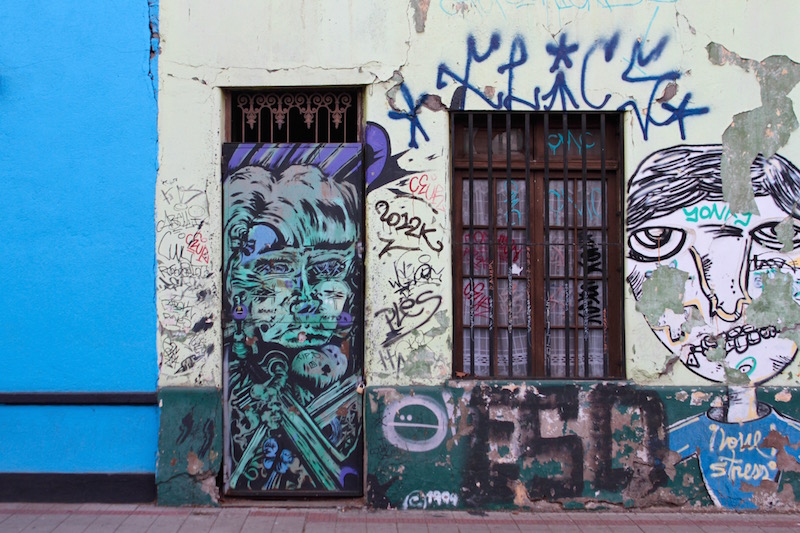 A few travel tips for those headed to Santiago: 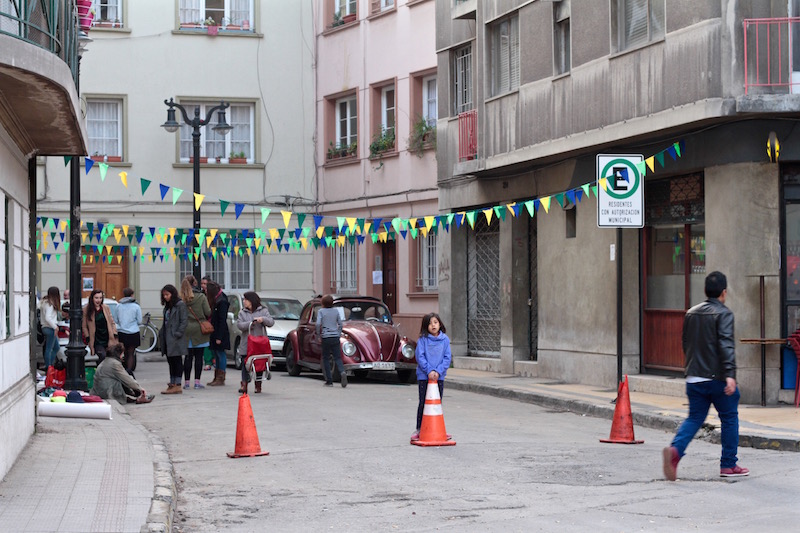