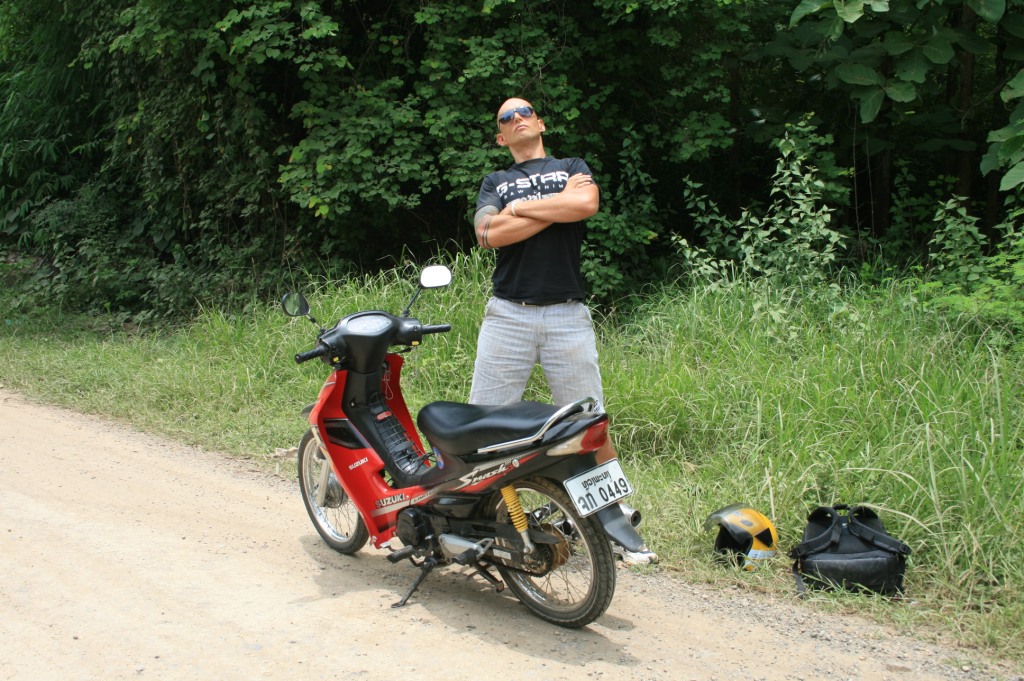 After our awesome day motorbiking in Vang Vieng, we were keen to repeat the experience in Luang Prabang.  Like most countries in South East Asia, Laos has a cc limit for motorbikes.  Although Colin would have liked something just a little gruntier (and a little bit less like a scooter), the motorbike above was the best we could organise.  We hired it for 24 hours, intending to do a round trip out to Pak Ou caves (28 kilometres east of the city) and then to Kuang Si waterfall, 35 kilometres west of the city.

We got off to a slightly late start, stopping in town first for coffee and to drop off some laundry, but by 11am we were on the road to the caves.  After a few wrong turns, we finally found ourselves at the turnoff.  Laos’ tar-sealed roads often leave a lot to be desired, but the road to Pak Ou was something else.  We endured 10 kilometres of the most bumpy, pot-holed, rock-strewn, elephant-poo-scattered dirt road either of us have ever seen. The poor little bike struggled, and  I had to get off a couple of times so it could make it up the hill.  Luckily, the countryside and view of the river promised to make the pain in our asses worthwhile… 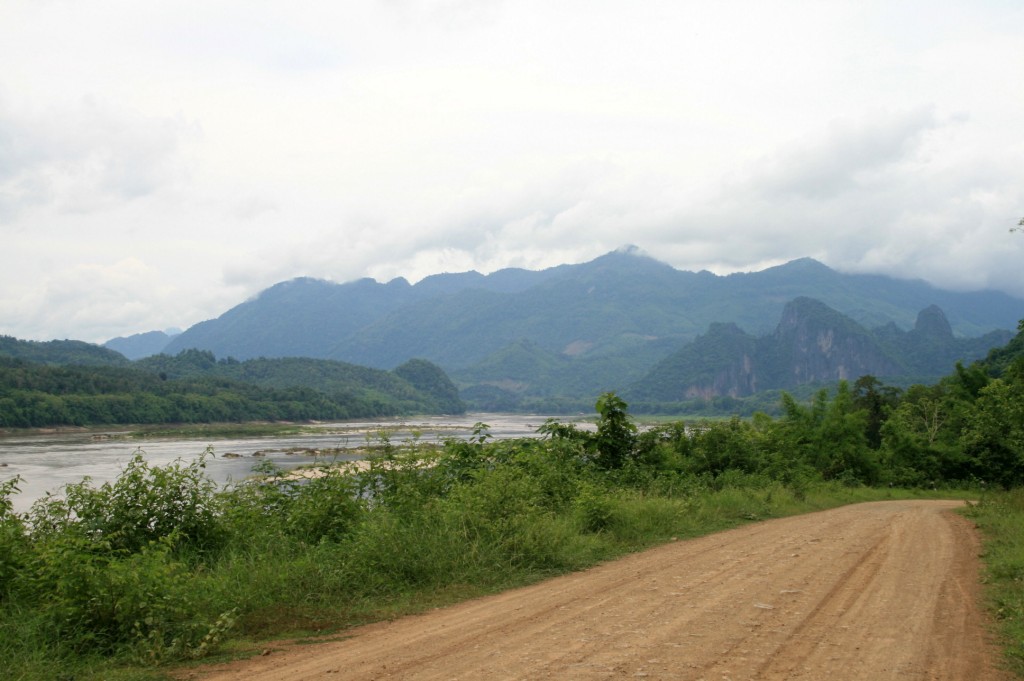 Nearly at our destination – on one of the smoothest stretches of road. 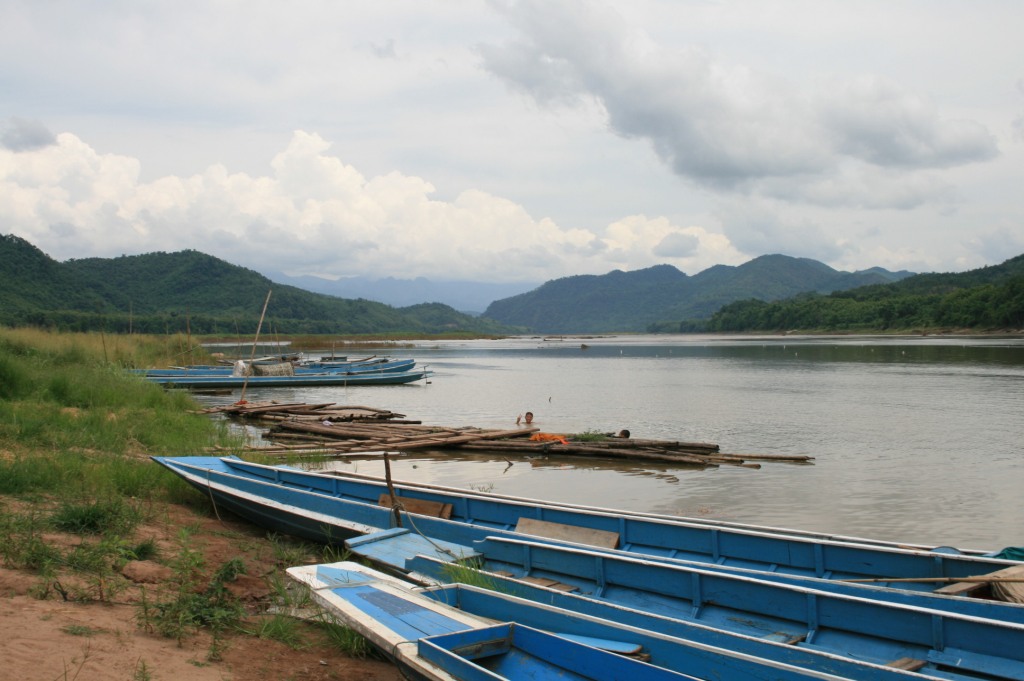 We arrived at a small village, parked our bike, then walked down to the river to hire one of these boats to take us across to the caves. 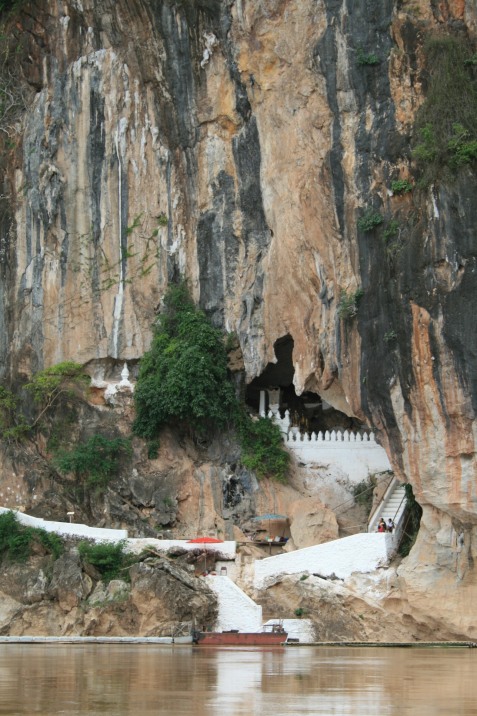 Approaching the caves. At the base is a rickety, floating bamboo jetty.  Several local women mind the caves, collect the entrance fee, and sell incense and flower offerings.

Inside the cave are thousands of Buddha statues, ranging in size from a couple of inches to a few feet. Most of the statues are old and crumbling. The caves actually function as something of a ‘graveyard’ for old and unwanted images of Buddha. 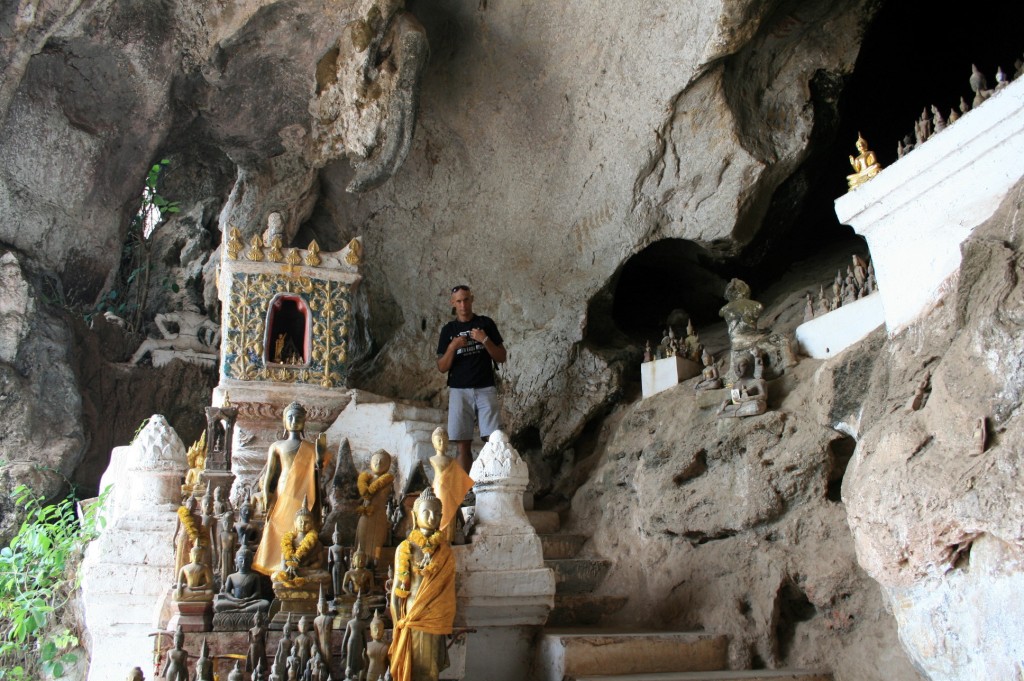 It is thought that the Lao people first began using the caves for religious purposes as early as the 8th century. This early use long predates the arrival of Buddhism in Laos, and dates back to when the local people worshiped nature spirits.

Further up the cliff there is another large cave which is much deeper than the lower cave. When I walked in and around the corner, it was almost pitch black, apart from a single candle burning in front of hundreds more Buddha.

By the time we had seen our fill of the caves and made our way back to the other side of the river, it was getting on in the day.  Our asses were still feeling pretty bruised, so we decided to leave the waterfall for the following day, and gingerly head back to town.

The next morning we were due to return the bike at 9.30am, so we got on the road before 6am for the 35km journey to the waterfall.  It was lovely being up that early in the misty dawn, riding through small villages and dodging chickens and scorpions.  When we arrived at the waterfall, we had the whole place to ourselves, a rare treat indeed, given that it is one of the top tourist attractions for the area.  We swam for about 45 minutes in the beautiful green water, then got changed and rode back to town.  We had time to call in for our regular morning coffee, to pick up our laundry, and buy a fresh pineapple, before returning the bike to the hotel and just making it in time for breakfast.  That’s living the dream alright, even if it is only at 110cc!!

The water looked cold, but wasn’t too bad – a great way to wake up.

This is more my style! 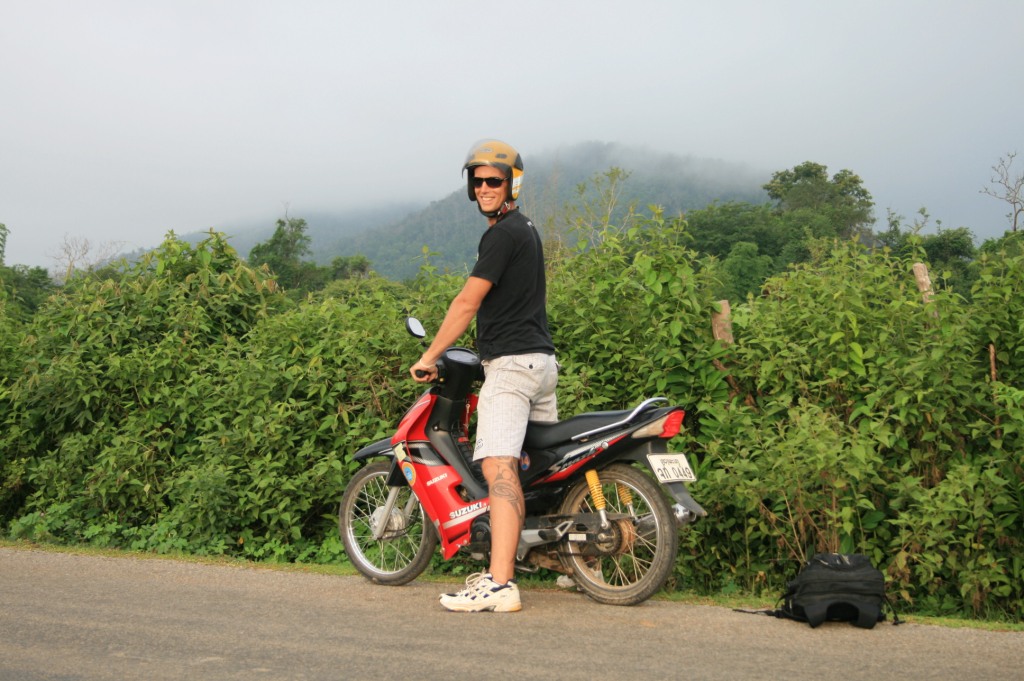