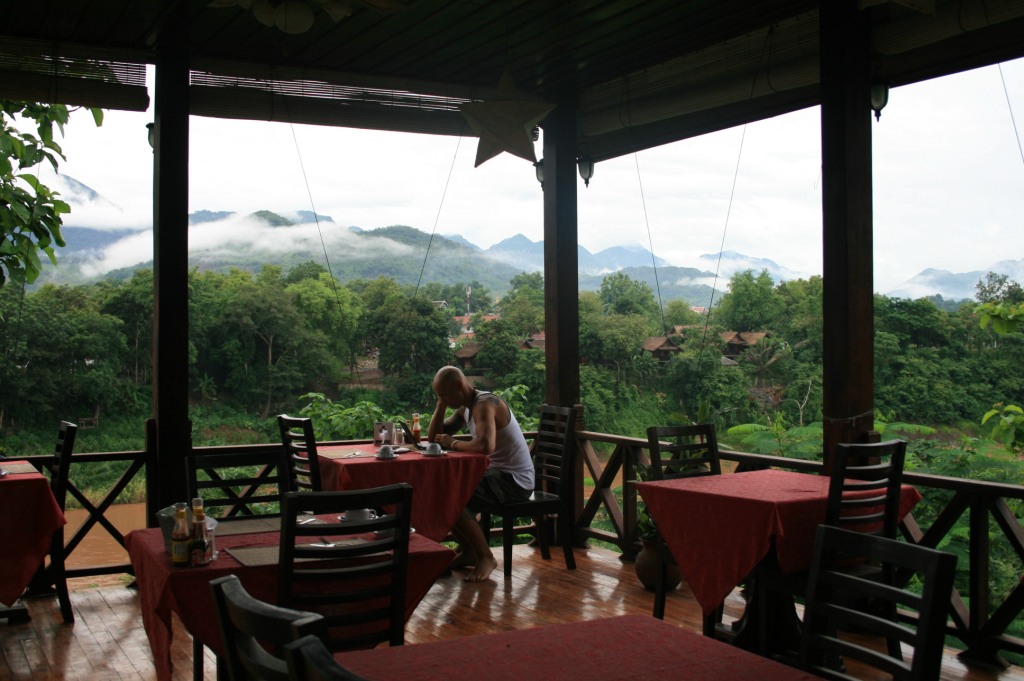 Luang Prabang is indeed a most beautiful, romantic and relaxed city.  It’s common for travelers to be so entranced that, as Lonely Planet states, they “dream of a never-ending stay”.  We met three such people who had fallen under its spell – a Frenchman, who kept leaving the country every month and flying back in to renew his visa; a Scottish hairdresser in the throes of a new relationship with a local restauranteur, dreaming of establishing a salon; and a Dutch chef on his fourth visit in as many years, who hoped, this time, to find a job with a sustainable income.  It’s not called the Paris of the Mekong for no reason: Luang Prabang just does this to people.

While experiencing our own share of fantastical yearnings during the 12 days we were there, we nonetheless bravely stuck to our schedule, sniffed our goodbyes, and caught the slow boat bound for Huay Xai on the border with Thailand.  We had heard that this two-day journey down the Mekong River was a bit boring, but on the contrary, we found the scenery breathtaking, boat-people-watching intriguing, and each others company endlessly pleasing (which, for a couple of old married people who’ve just spent a whole two months in each others company, is a pretty good sign, in my unbiased opinion).  Slow boats: quite clearly the optimum way to travel, wouldn’t you say?  (And yes, there is also a fast boat option which travels the same route in only one day, although the possibility of fatal crashes, not to mention the certainty of severe trauma, quite rightly deter many.) 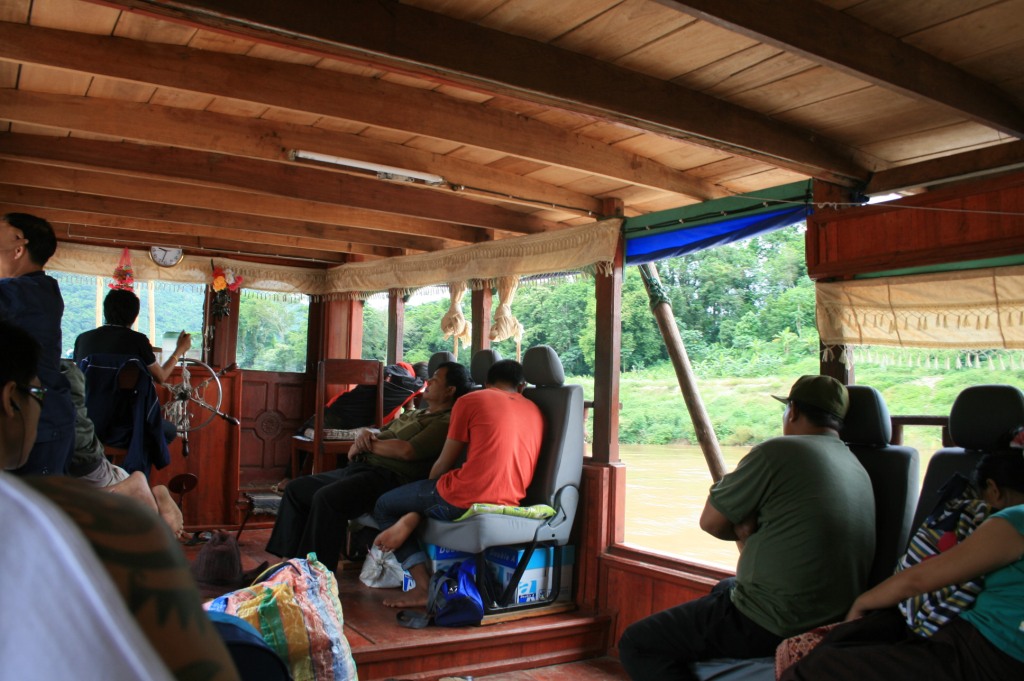 Interior of our boat. Most of the passengers were local Lao, who seem to be able to curl up in the most awkward positions and fall asleep at the drop of the hat. This photo was taken only about half an hour into our journey on the first day.

Typical river vista. Some of you may remember the bland and fairly featureless photos from our trip down the Mekong from Phnom Penh to Vietnam. In contrast, the northern segement of the river that we traveled through on the first day was so beautiful, in that green, unspoilt, wild and remote sense that only Laos has treated us to. 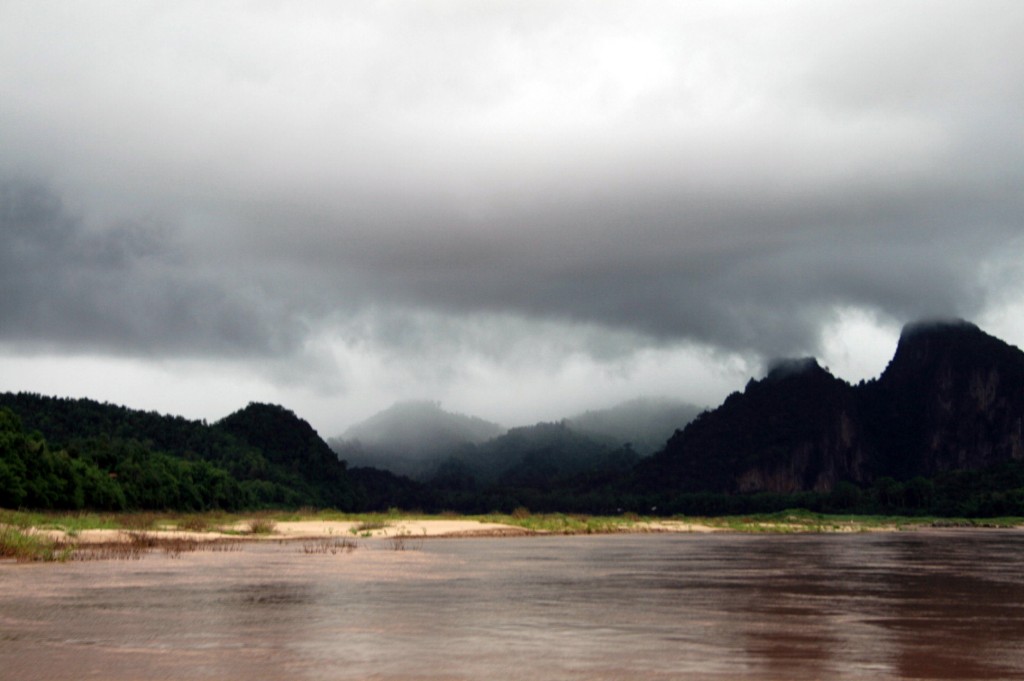 Approaching rain. Less than five minutes after I took this picture, the boat met with torrential rain. The crew struggled with the wind to roll down tarps to cover the open sides of the boat, transforming the interior into a dark and intimate tent (in a moment of re-experienced childhood, I was transported to a typical “Winter Game” blizzard…) 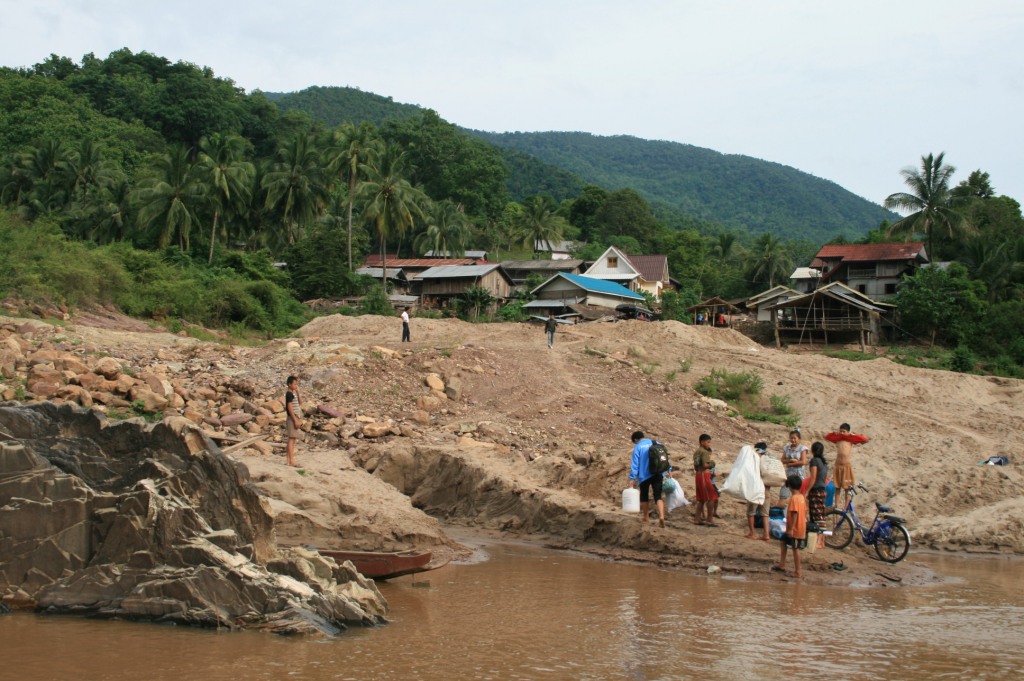 Occasionally, the dense jungle would part, revealing a small village. This was one of the larger ones we encountered on the first day (and still, only boasted maybe 10 huts at most). The boat dropped off a few people here, and several sacks and boxes, including a bicycle that had been strapped to the roof of the boat. 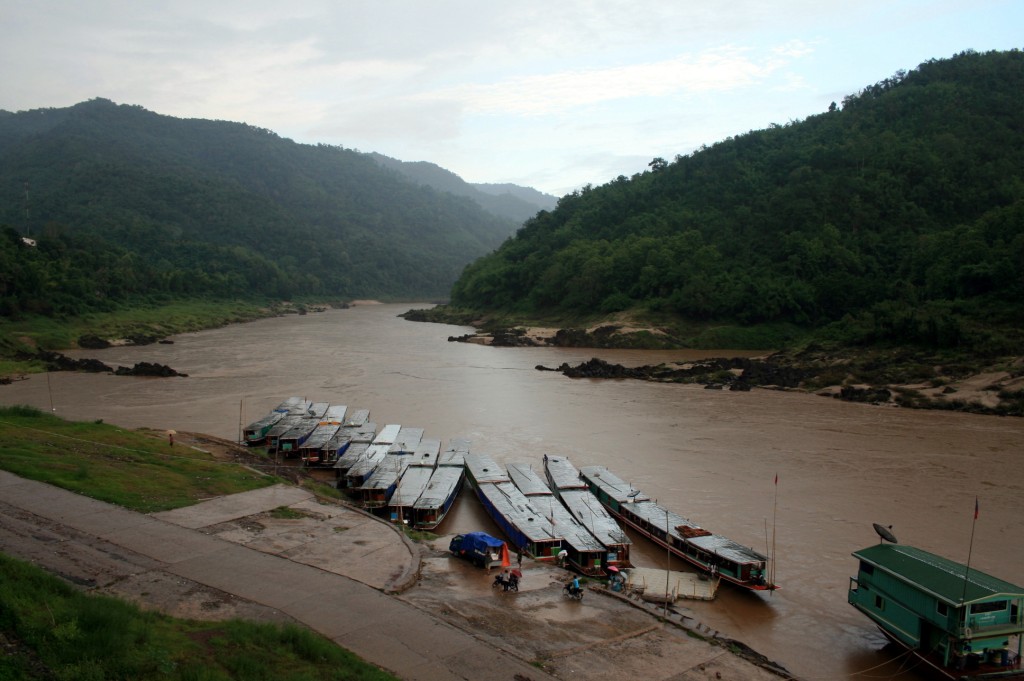 Nearing dusk, and after nine hours of boating, we arrived at Pak Beng, a small town with a population of 2000 people, where we spent the night. We rented a little bungalow, and this photo was taken from the balcony. There isn’t much at all at Pak Beng, except a jetty (our boat is third from the right), a few guesthouses, and a sense of total isolation. We very nearly decided to stay an extra night here, which in spite of (because of?) the the absence of ATM’s, Internet, and other Western trappings, effortlessly established Laos as a “must-return” country for us. 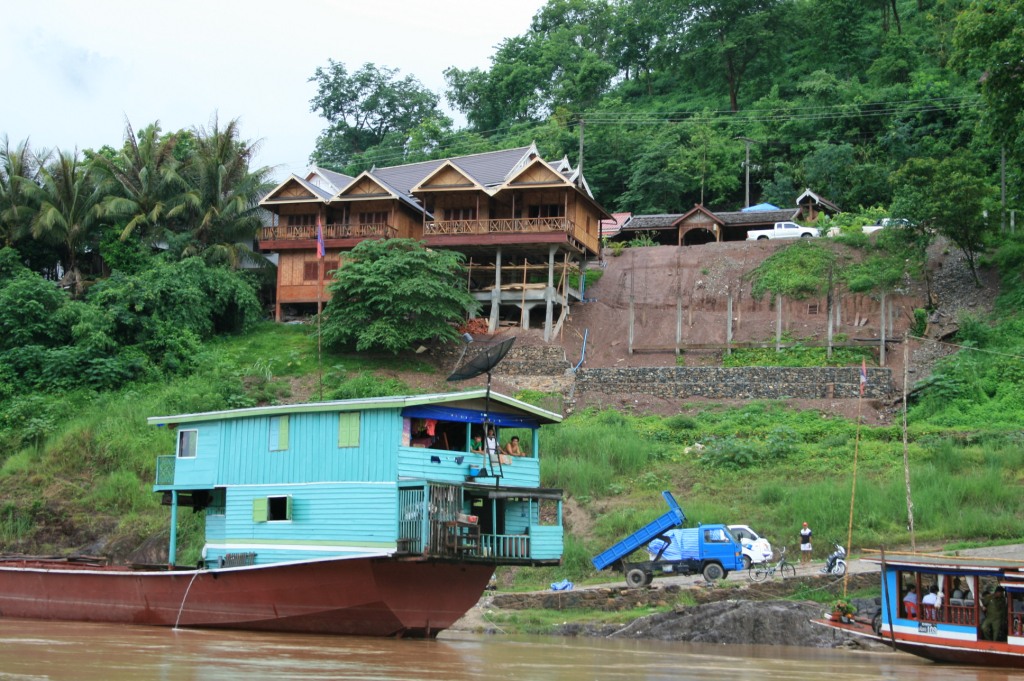 Sadly, leaving Pak Beng the next day. The bungalow we stayed in is second from the right. 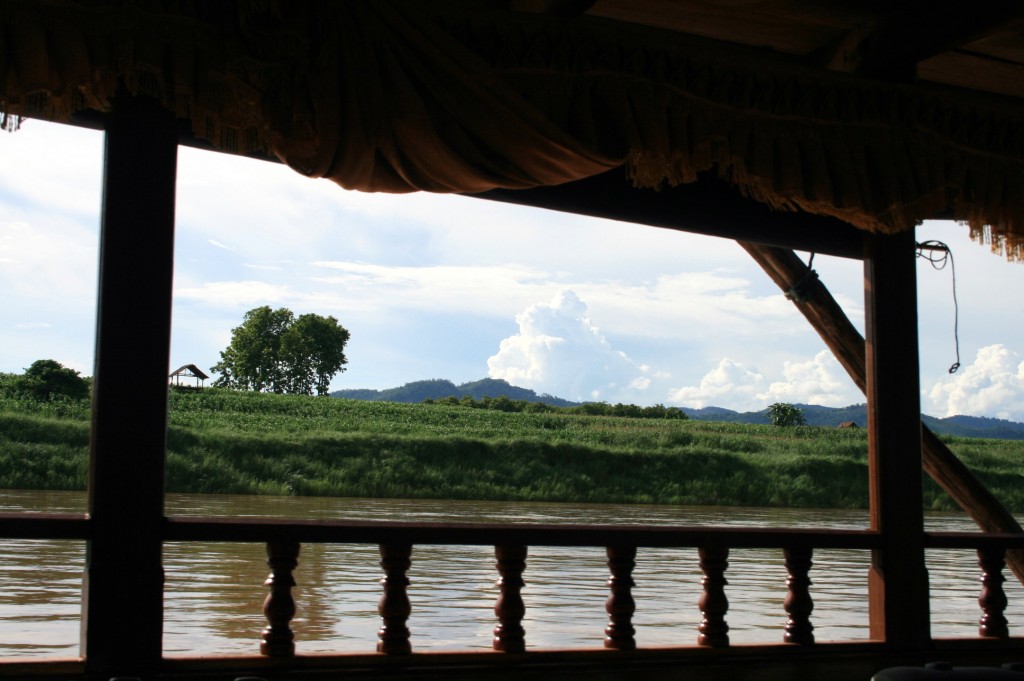 In the course of the next day, the landscape started to open up a bit more. We encountered increasingly more tracts of cleared and farmed land as we neared the border with Thailand. This field was planted in sweetcorn. 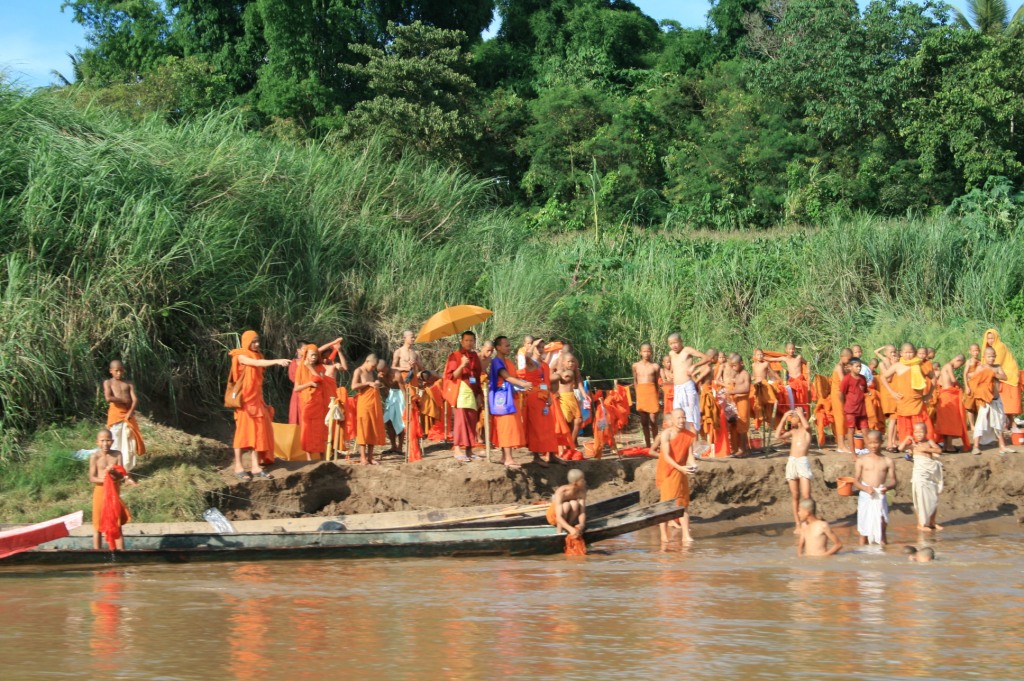 About an hour south of our journey’s end, we encountered around 100 Lao monks bathing in the river. It felt a bit sacriligious to snap away at their bare chests, but this didn’t stop me and the other few tourists from frantically capturing this moment as the boat swept past. The cheers and waves of the monks indicated that they were perhaps ok with being celebrities for a few seconds. 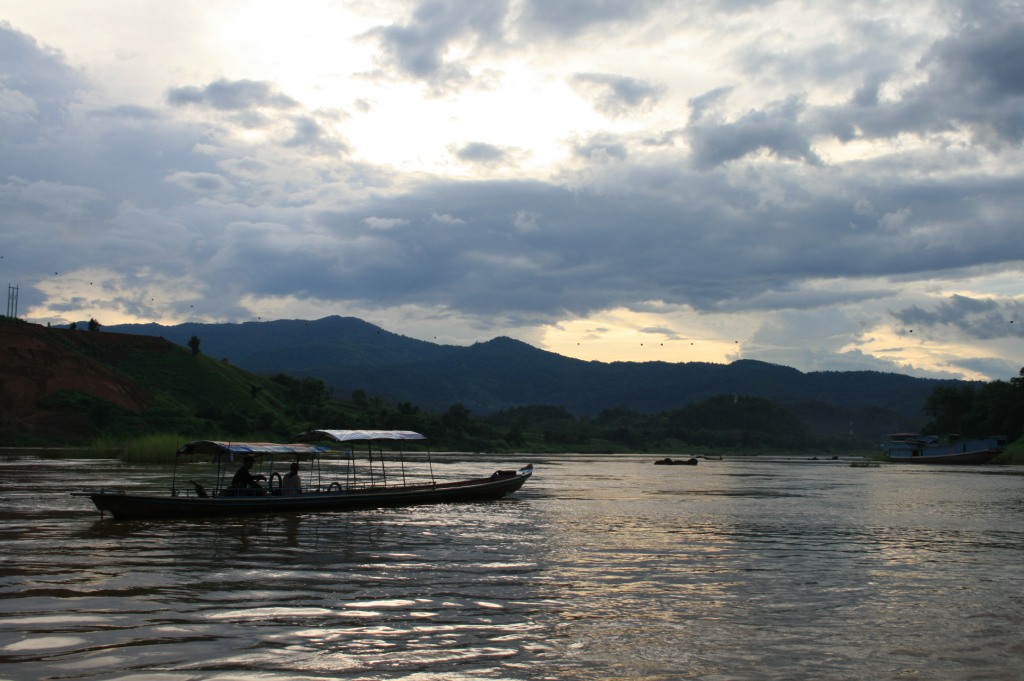 Arriving in Huay Xai after another nine hours on the boat. Thailand is to the left of the river, and Laos to the right. The border was closed by the time we arrived, so we stayed overnight in Huay Xai and crossed into Thailand the following morning.