There have been a few changes around here, a bit of out with the old, in with the new. First of all, I’ve changed the design theme of Chez Moi. My original design (Twenty Eleven) served me well for three years but it was getting a bit tired. The recently released Moka design is fresh and minimalist, and I love the way it looks. My content is now surrounded by white space, photos load in a larger size and consequently have more impact, and a range of optional features (such as the ability to style the first letter of your paragraphs – the drop cap feature) provide numerous customisation opportunities. I’m still in the process of adjusting older posts that didn’t transition cleanly and figuring out how I want everything to look, but the emerging result feels well worth the effort.

Other changes include a new page called Creating Home, which contains a collection of posts that engage in some way with meanings of home and place. A revised blogroll page (now called Reading) goes beyond a simple list of favourite blogs to explain why I love each one, and includes links to favourite posts. A refreshed About page has stripped out unnecessary detail, and I’ve also used the new recipe short code feature in WordPress to transform all recipes into a consistent format with a clean print function. Finally, I’ve changed my public profile username to Chez @ Chez Moi, getting a small kick out of the multiple play on words that results: chez (my real name) means “home” in French, but its more colloquial translation is “at”; chez moi is “my home”.

I’m getting that fresh, spring-clean feeling that comes with new beginnings, and as we all know, new beginnings should always be celebrated.  Fortuitously, I happened to make a batch of vin d’ orange this summer. Orange-infused wine is an aperitif commonly made in France with bitter Seville oranges which grow plentifully there. David Lebovitz’s recipe for vin d’ orange had been on my mind for months but Seville oranges only have a short season in Australia, around August, and even then are quite difficult to obtain. Fortunately David provides an alternative recipe that uses fresh organic oranges, rose wine, and a touch of cinnamon and vanilla.

It’s the easiest recipe ever – throw everything into a large jar and store in a cool dark place for two weeks, then strain, bottle and enjoy. I like mine in a champagne saucer with a splash of soda to provide a little celebratory fizz. Cheers! 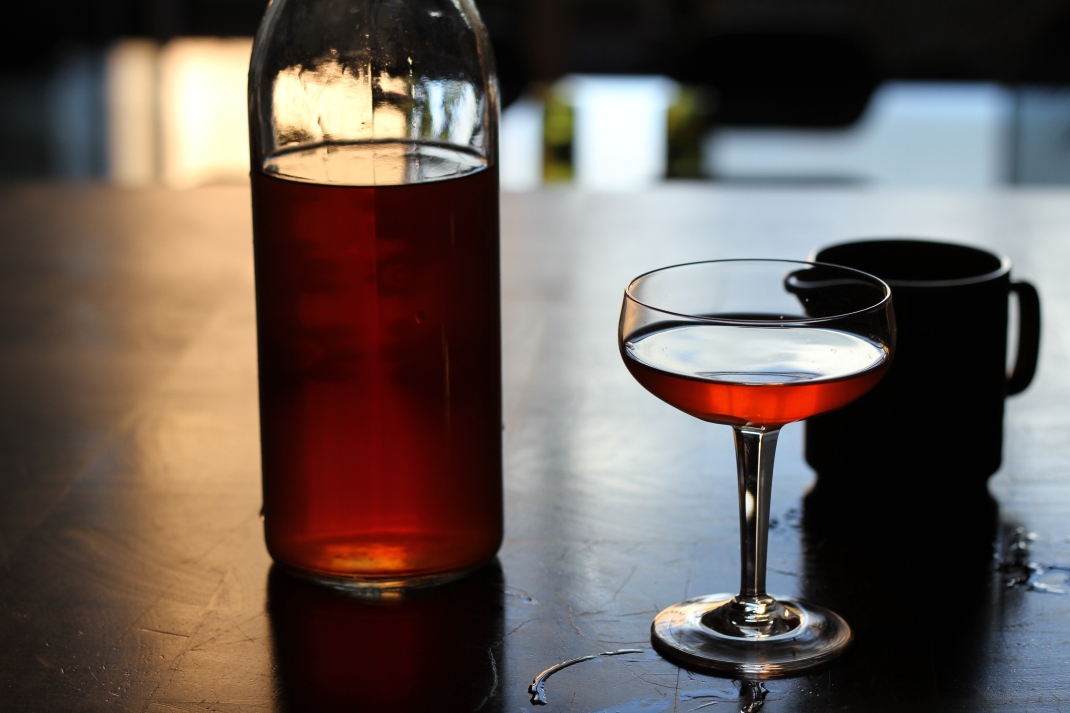 In a large glass jar stir together the sugar, vodka and wine. Don’t bother to fully dissolve the sugar. Add the cinnamon stick and vanilla bean. Cut the oranges into quarters and add them to the jar. Screw on the lid and place in a cool, dark spot for two weeks, giving the jar a little shake now and then.

Once the two weeks are up, remove the oranges and spices and strain the liquid through cheesecloth or a fine strainer. I found that the liquid still looked rather murky after this, so I strained it again through coffee filters placed in a sieve set over a bowl. The slowness of the dripping drove me insane with anticipation, but the brilliantly clear orange liquid that resulted was worth the wait. Funnel the vin d’ orange into a clean bottle and store in the fridge, where David promises it will keep for six months (mine definitely won’t last that long).

This is delicious chilled and served in small glasses topped up with a dash of soda. Don’t forget that the fortification provided by the vodka raises the alcohol content of the wine considerably! 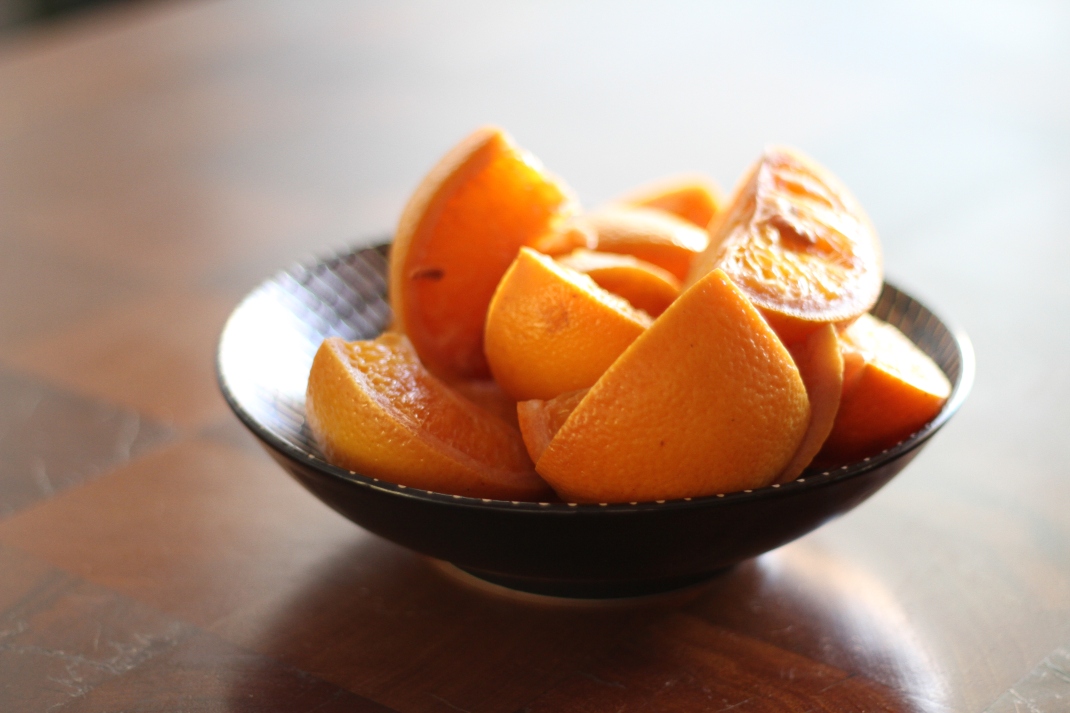 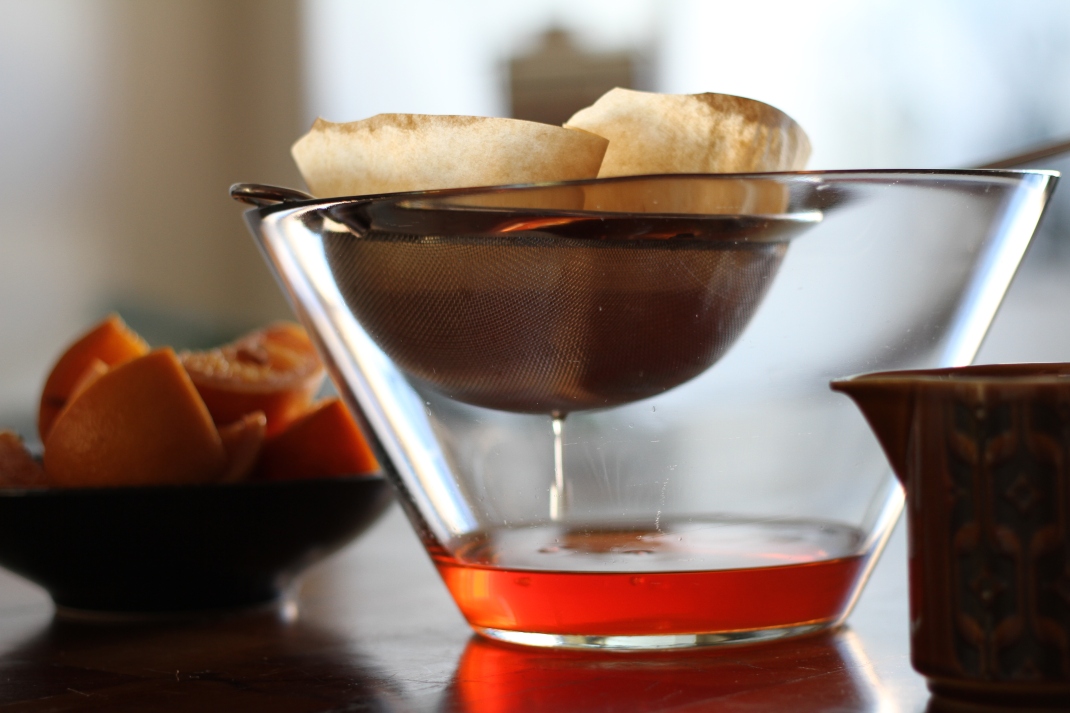