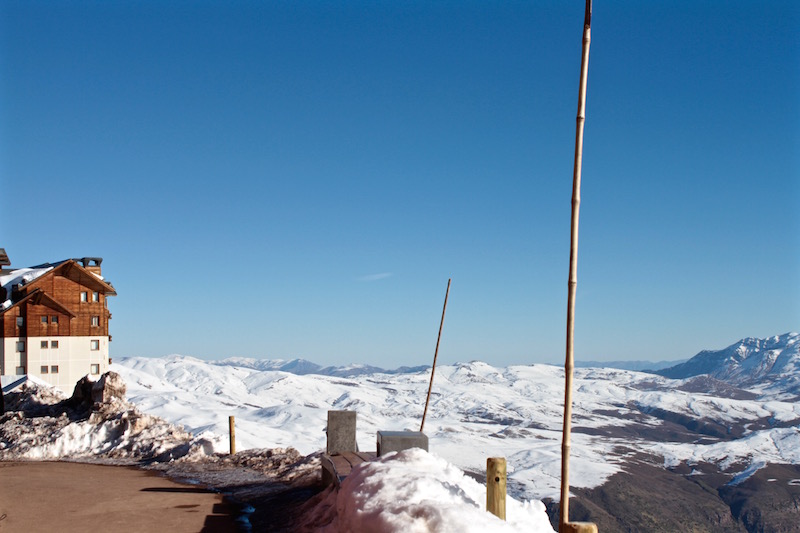 Part of the motivation for our South America holiday was to celebrate our birthday in a new and exotic location. No, that’s not a typo, and yes, we share a birthday in addition to an apartment, a car and a life. Colin is a year older than me which means that he was blowing out a candle on his first birthday cake at the moment I emerged, squalling, into the world. It took another 15 years for us to fall in love at high school, and only another 25 for us to celebrate our weirdly conjoined birthday in the Andes Mountains on the other side of the world.

The mountains to the east of Santiago are very accessible from the city. We booked a tour which departed early and it didn’t take long before the landscape changed from houses and streets to barren hillsides dotted with cacti as the bus steadily climbed upwards. The tour guide, Daniel, kept us entertained with stories and amusing anecdotes about the history of the area, spoken alternately in Spanish then English. Unfortunately much of the entertainment was lost on me as I concentrated on sipping water to suppress nausea and dizziness, thanks to a fourth long night of little to no sleep (jet lag is a bitch). Luckily for me our first stop at Farellones, a small town and ski resort, came within an hour’s drive of central Santiago. Finally, the solid ground and crisp mountain air revived me and I began to enjoy the day. 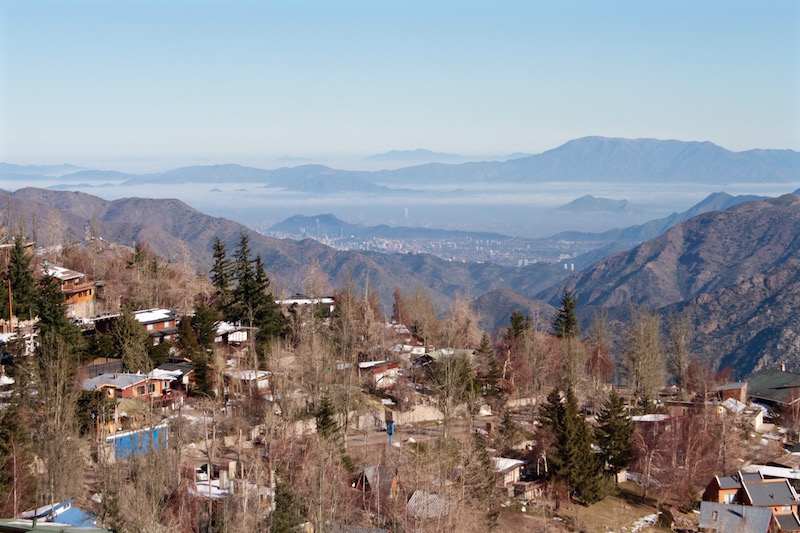 In Farellones, looking back to Santiago in the distance. This photo clearly shows why Santiago experiences so much haze and smog, as it sits in a basin between the Andes to the east and the Chilean Coastal Range (Cordillera de la Costa) to the west.

Shortly after Farellones we stopped again next to a pristine stretch of snow. Much of the time our journey was flanked by rocks on one side of the bus and a steep drop on the other, but here the land had flattened out providing the perfect spot for snow play. Despite growing up in New Zealand, we lived a long way from the mountains further south and had never really spent time in the snow. Feeling like a couple of kids, we crunched about, threw snowballs and took multiple selfies against the bluest sky I have ever seen. On the road again, the tour guide discovered that it was our birthday, which prompted the jovial passengers to sing “Happy Birthday to You” (in Spanish, of course!).

By late morning we had reached our destination, the ski resort Valle Nevado, where we enjoyed a leisurely four and a half hours to explore. We had promised ourselves a bottle of champagne for our birthday, so we made our way up the hill to a restaurant overlooking the ski field. There we had our pick of the tables and selected one outside in the full sun with the beautiful mountains as our backdrop. Time slowed right down in that deliciously lazy, holiday-at-last kind of way. The hours slid by and then, out of nowhere, I suddenly felt chilled to the bone. It was time to head back to the bus anyway so we bought large, steaming hot chocolates and defrosted in the heated lobby until it was time to board. On the drive back down the mountains the tour guide actively helped the driver to navigate the hairpin curves of the road. When we reached the bottom he congratulated us on making it safely down one of the world’s top 10 most treacherous roads.

My last significant birthday, of the mid-decade variety, was celebrated in steamy Bangkok at the tail end of a three-month trip around South-East Asia. Our wonderful day in the Andes Mountains had a different vibe but was equally memorable. I won’t forget the feel of dry, powdery snow or the stillness of the frozen landscape in a hurry. Best of all, thanks to the sun, fresh air and wine, that night I broke the back of my jet lag and slept solidly for nine hours. 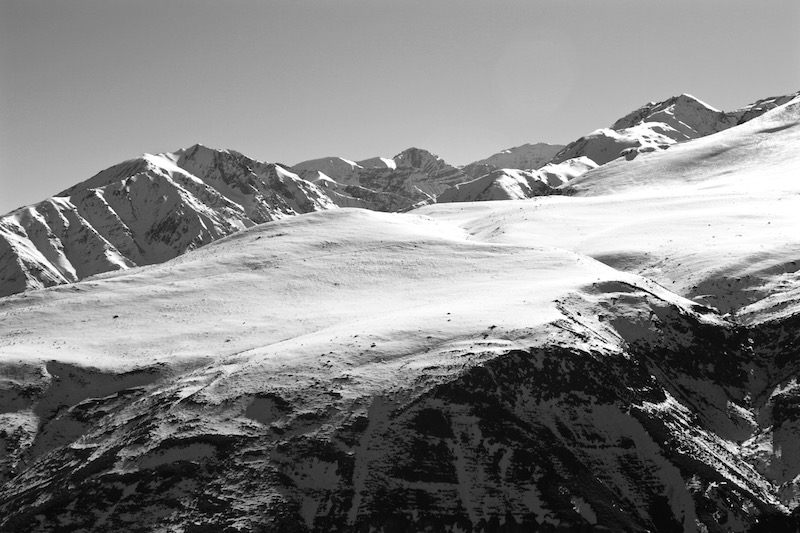 If you’re in any way interested in wine then no trip to Santiago would be complete without a winery tour. One of Chile’s main wine regions, the Maipo Valley, is located just to the south of the city. With limited time to explore, we elected to visit the Concha y Toro winery which is the largest producer of wine in South America. It might be a global conglomerate (Concha y Toro exports wine to over 140 countries) but on a softly-lit winter’s afternoon, the vineyard felt like a beautiful, rustic parkland. 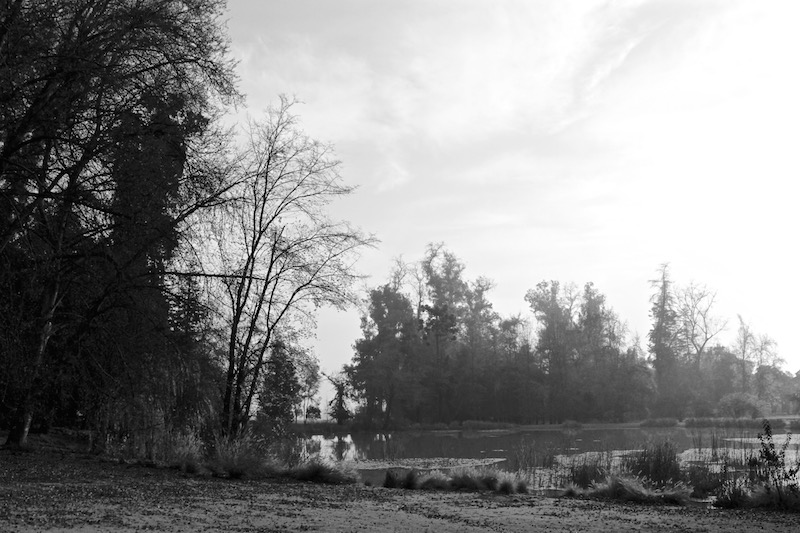 As the sun began to set over the vines we tasted a crisp Sauvignon Blanc before heading underground. The vineyard was founded in 1883 and wine production long outgrew the capacity of the ornate cellar. Although it is still used to store some special wines, the cellar is maintained for its character and historical value. We were treated to a a vivid representation of the story behind the Casillero del Diablo brand, created over 100 years ago when founder Don Melchor de Concha y Toro spread a rumour that his cellar was inhabited by the devil – a strategy which, as planned, protected his wines from theft. 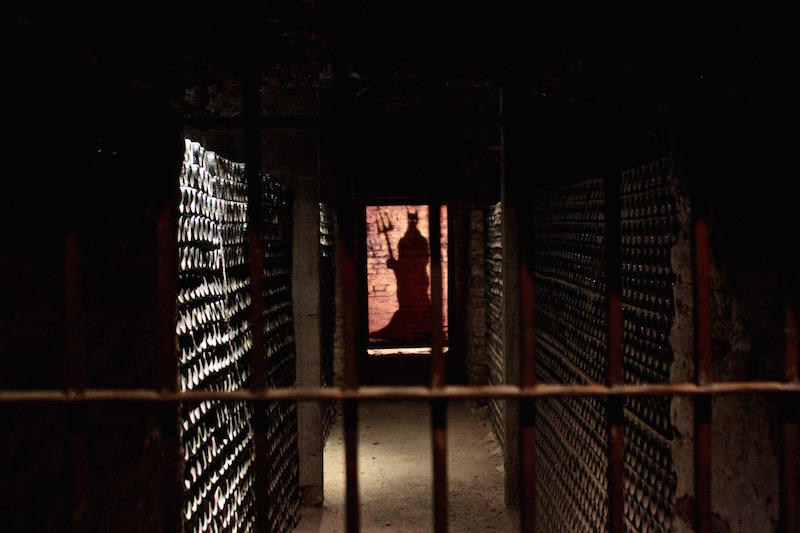 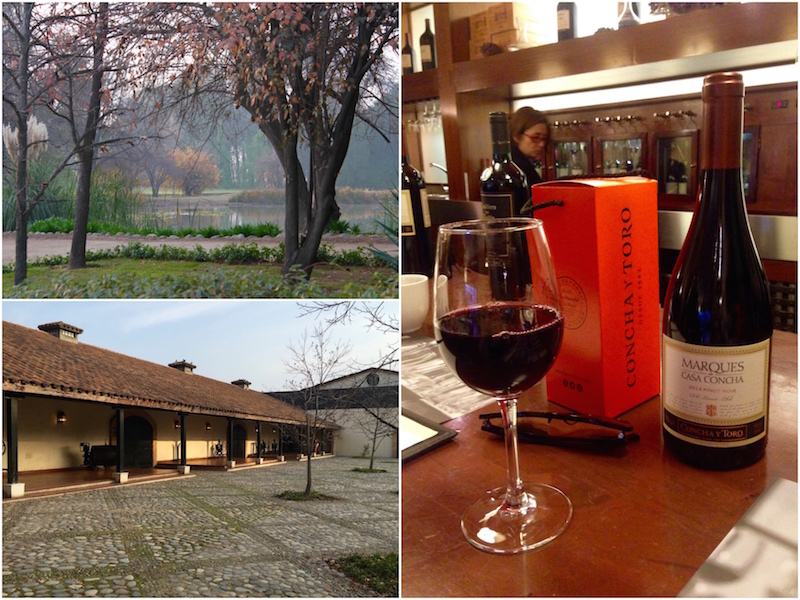 Emerging from the cellar we tasted two red wines, a 2014 Cabernet Sauvignon and a 2014 Carménère before settling into the adjoining bar for a cheese platter and a glass of delicious Pinot Noir. Back on the bus with the heating on, we settled in for a cozy 90 minute drive back to the city. It was rush hour by the time we arrived, and the bus crawled off the motorway, stuck in traffic. Suddenly a shower of glinting glass fragments appeared. Hooded figures had smashed the passenger windows of the two cars in front of us, reached in, pulled out bags and sprinted away into the dark. The tour guide and driver barely noticed; it happens, they said.