The Month of Cake is a celebration of my wonderful colleagues. Sadly, I’ve had to leave these lovely people to take up a new opportunity. To show my appreciation for all the great times we’ve had, I baked them four cakes – one for each week of my notice period. For more details about why these guys are so awesome, check out my post from Week 1 of The Month of Cake.

The final cake of The Month might not win any prizes in the looks department, but it easily got the most votes for flavour. I have to agree; it is good. It’s a dark, sticky ginger cake, made with a whopping quantity of fresh ginger, balanced out with cinnamon, cloves and black pepper and mellowed with treacle. It smells and tastes like the warmest kitchen on the coldest winter’s day, like roaring fires, mulled wine and the white Christmas I never had. I’m not ashamed to admit that I licked the spatula clean after pouring the batter into the tin. 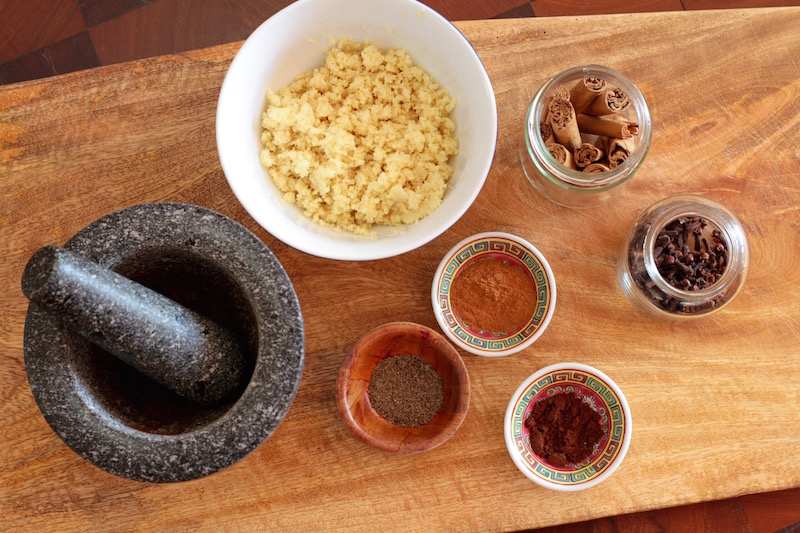 This is a David Lebovitz recipe. David’s recipes are always wonderful, so when I was searching for a suitable finale for The Month, it was only natural for me to turn to him. I came across this recipe for Ginger Cake in his book, Ready for Dessert. The cool weather had already planted the seed of gingerbread in my mind, but it was David’s introduction that held my attention:

Of all the desserts I’ve ever made, this cake is the one that is most renowned, drawing acclaim for its incredibly moist texture and its spicy zing from an overload of fresh ginger. Many people have told me this is their all-time favourite dessert. And whenever I make it and take a bite, I’m in agreement: it’s one of my favourites as well (2010: 42).

If this was David’s verdict, then that was good enough for me. As David promised, the flavour did not disappoint, but I did have trouble with the cake doming and splitting quite dramatically. The photo in David’s book shows a perfectly flat cake whereas the middle of mine was easily an inch higher than the sides. After a bit of research I made the cake again, using cake flour and measuring the baking soda very precisely, but the same thing occurred. I don’t think it affected the texture or flavour but for the sake of appearance I would prefer a flatter cake. Next time I’ll try a slightly lower cooking temperature, unless any of you has better advice?

Update 9/9/15: Jen from Larder & Loved produced an almost crack-free cake by using a lower oven temperature and slightly less baking soda – head over to her for directions (thanks Jen!).

This divine Fresh Ginger Cake lasted all of ten minutes at morning tea time and brought the Month of Cake to a fitting end. In real life I’ve already finished work and farewelled my colleagues with pizza and drinks. That final week induced a sugar frenzy at work, and in addition to my cake and some brownies I got from I Heart Brownies, other people contributed homemade chocolate eclairs, date scones, peanut butter cookies and bliss balls. It was a great last week (thanks guys – again!) but all that sugar does take a toll. I’m currently enjoying a week at home before starting the new job and, out of desperation, I’ve declared it the abstemious Week of Salad. Water and lemon juice, anyone?

If you missed the other cakes, Week 1 was the bright and festive Orange & Yoghurt Semolina Cake. Week 2 was the gluten-free week, and I baked Chocolate Buckwheat Cake and served it with Cinnamon Labneh. In Week 3 I baked one of my all-time favourite cakes, a tender Pistachio Cake with Vanilla Pears.

Using a food processor, chop the fresh ginger until very fine. Set aside. Place the flour and dry spices into a medium bowl and whisk together to combine and aerate. In a large bowl, whisk together the sugar, molasses and oil (it won’t combine well at this point, but just pull the ingredients together somewhat).

Heat the water in a small saucepan. When it is close to boiling, add the baking soda and stir to dissolve. Pour the hot water over the molasses mixture and whisk together, along with the chopped fresh ginger. The mixture should now combine smoothly.

Sprinkle the flour 1/4 cup at a time over the molasses mixture, and whisk to combine after each addition. Briefly whisk the eggs together in a small bowl, then add the egg to the batter and whisk thoroughly. The batter will be very runny – resist the temptation to add more flour.

Pour the batter into the prepared cake tine and bake for about 1 hour, or until a toothpick inserted into the centre comes out clean. Let the cake cool completely in the tin then invert onto a serving plate. This cake definitely tastes better on the second day (I promise you that it’s worth the wait).