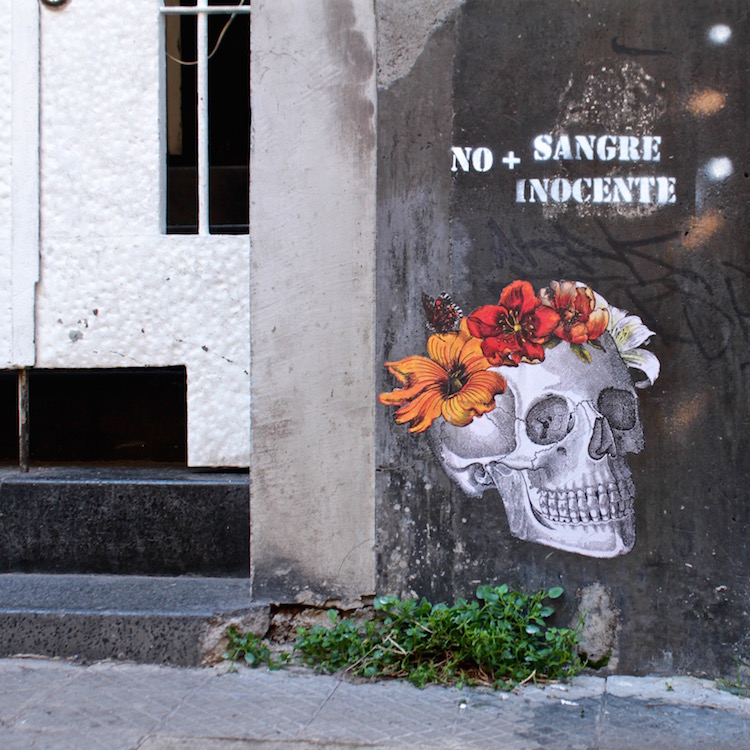 Australia and New Zealand don’t have much of a street art culture. Some parts do (Melbourne is probably the street art capital of Australia), but it’s not something that you commonly see, possibly because our communities don’t have a clear understanding of street art as distinct from graffiti or tagging. In the cities we visited in South America it was clear that a vibrant street art scene helps to express the soul of a city and its people. Street art can be irreverent, subversive, political, mind-bending and disturbing – sometimes all at once. Street artists use their chosen medium to comment on or satirise society, to commemorate historical events, or simply to create beauty and colour in the urban landscape. It’s democratic, accessible and free to view at all times – an art form of and for the people.

Our interest in street art grew as we travelled. At our first stop in Santiago we weren’t looking for it and so we only photographed the art that we happened to chance upon. This is a shame, because I now know that Santiago is home to some incredible street art, particularly in the neighbourhood of San Miguel where local artists have worked to create an open air art museum. It is also possible to take tours of the local street art scene (by foot, by bicycle or by car) through this company. If only we had known! Still, I’m grateful for the little that we did see so that I can share our modest collection here. More street art will come when my blog posting catches up to Buenos Aires and Valparaíso. For general travel notes on our Santiago visit, click here.

Note: I have attempted to identify and credit the artists for each piece but I was unable to identify most pieces. If anyone recognises a piece or notices a mistake, please let me know in the comments. Most photos are mine; a few are Colin’s. He used an iPhone 6 and I hate to say it, but I dare you to detect any difference from mine – taken with a Canon 7D, which weighs a tonne.

Around Lastarria the paste-up (like a collage) seemed to be the predominant stye of street art. These are usually small art works, and they decay much more quickly than painted murals, which adds to their charm. The art above and below are by Caiozzama (except for the one of Salvador embracing a football player, which is by Luis Bueno). The ghoul above is titled “The King” – a reference to Burger King and (presumably) the notion that ‘you are what you eat’. The salmon below is titled “Do Not Eat Shit”, and is a critique of the Chilean salmon industry. The sad birthday boy is titled “Without Facebook No Birthday”, although the Facebook reference wasn’t clear when we saw it due to the deterioration of the image. 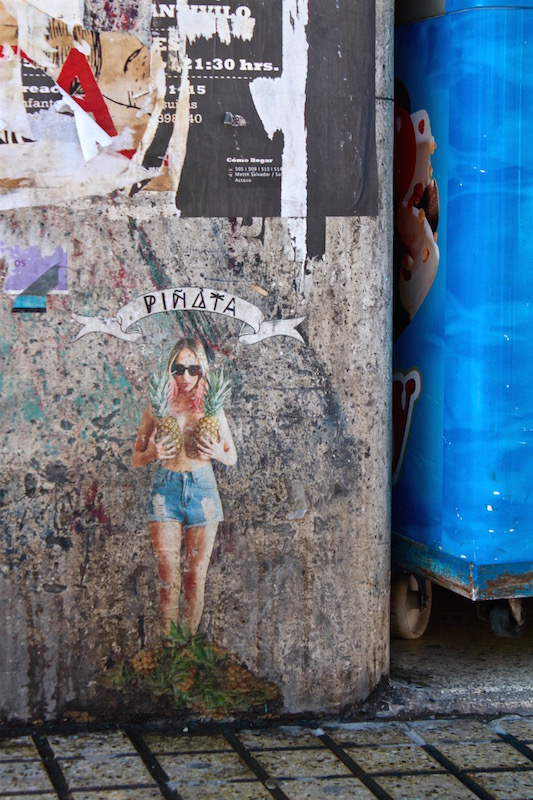 Convict 13 below is a paste up that I spotted three times in different parts of the central city. Titled “The Usual Suspects”, it is by the artist Phantte. 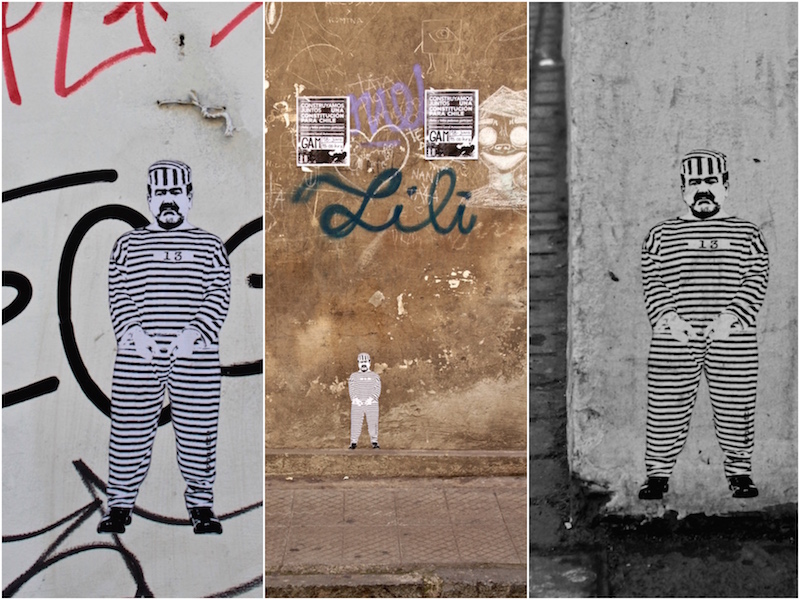 On our last morning in Santiago we walked over the Mapocho River to visit the bohemian suburb, Barrio Bellavista. The river runs through the centre of Santiago and there are murals along both sides of the canal as we discovered while on board a bus heading out of the city. The mural on this small segment of the depicts the 1973 coup led by the CIA-backed General Augusto Pinochet, which overthrew the democratically elected Marxist president, Salvadore Allende.

We arrived in Bellavista at about 8am when all of the shops and cafes were still shut. Although the streets were almost deserted, one advantage of being there so early was that the doors in front of each shop were still rolled down. If it had been later in the day we would have missed a multitude of colourful, retro artworks like the one below. Elsewhere in Bellavista we saw mural upon mural upon mural and spent a pleasant hour taking photos, wondering what the next bend in the street would reveal. 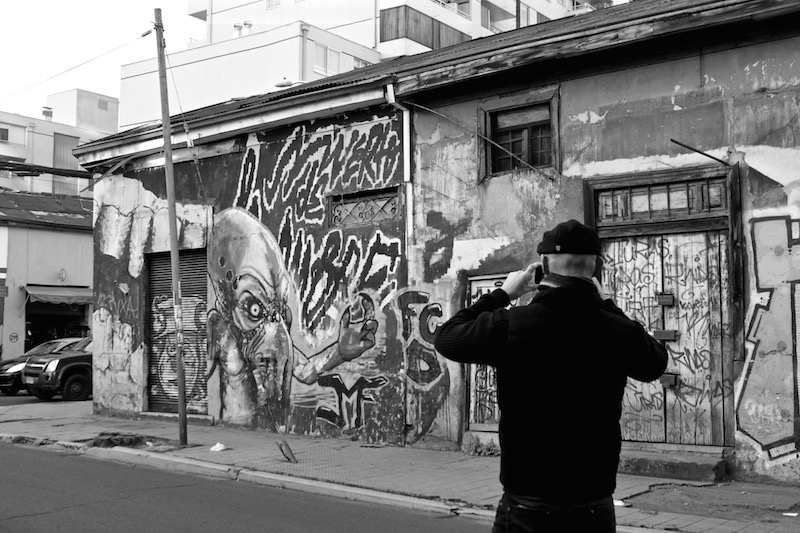 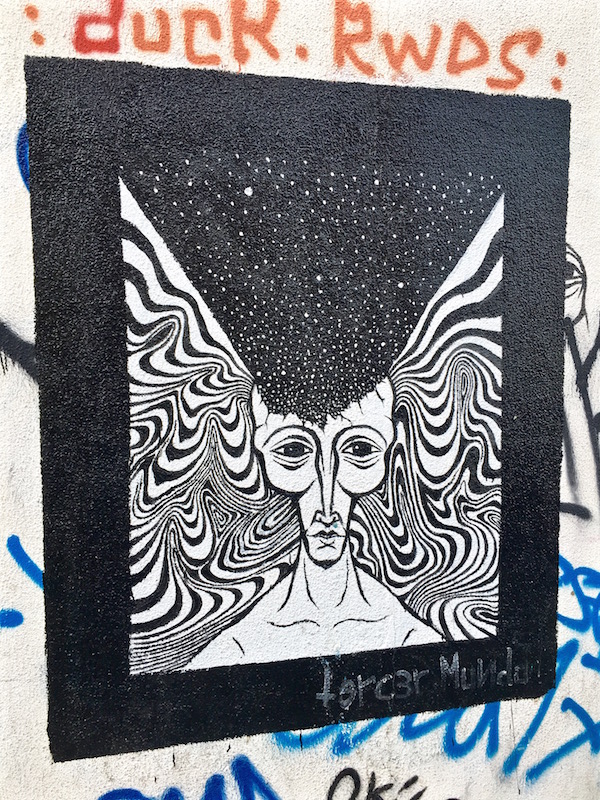 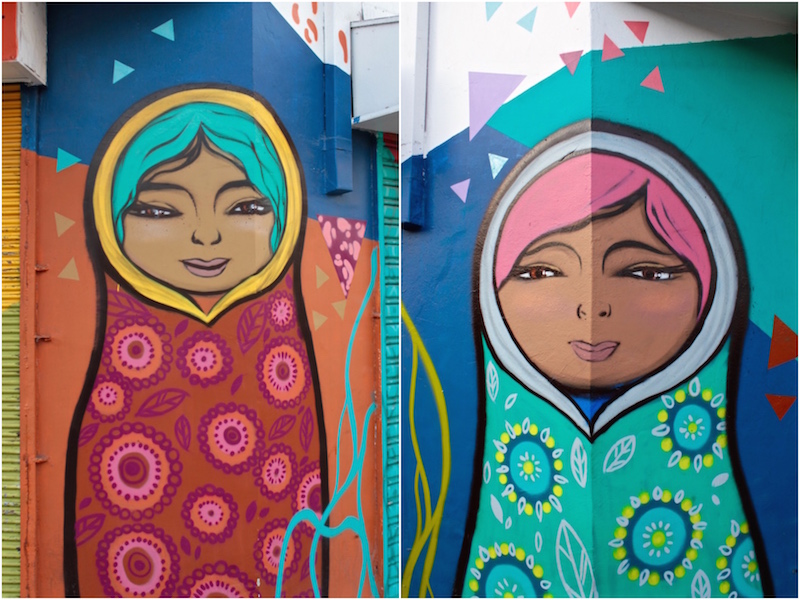