Last week Cyclone Debbie signalled an abrupt end to summer. The storm hit North Queensland as a category 4 tropical cyclone, devastating Bowen, Ayr, and the popular tourist destinations of Airlie Beach and Hamilton Island. The force of the wind soon reduced, but the storm continued a slow path south, dumping such a quantity of heavy rain that widespread flooding was experienced across south-east Queensland and northern New South Wales. It was a dramatic, intense week and for many people it’s not over yet; some areas are still flooded, and where the waters are receding the clean up now begins.

I was off work on Wednesday while Debbie was ravaging  North Queensland. Down in Brisbane we didn’t experience the torrential rain until the next day, but even so, the weather was dark and foreboding (the photos give a good sense of what the natural light was like). At such times I only wish to be in my cosy kitchen and so I made Rummaniyeh, a Palestinian stew of lentils boiled together with aubergine (eggplant). This might not sound appetising but I can assure that it is delicious. The aubergine becomes silken and savoury, providing a luscious textural contrast to the lentils, which retain a little roughness. The stew is spiced with ground cumin and fried garlic, and the whole thing is lifted with the addition of tart pomegranate molasses and lemon juice. In fact, Rumman means pomegranate, so this dish literally means “pomegranatey”. This is emphasised by the addition of fresh pomegranate seeds sprinkled over the top like little jewels. 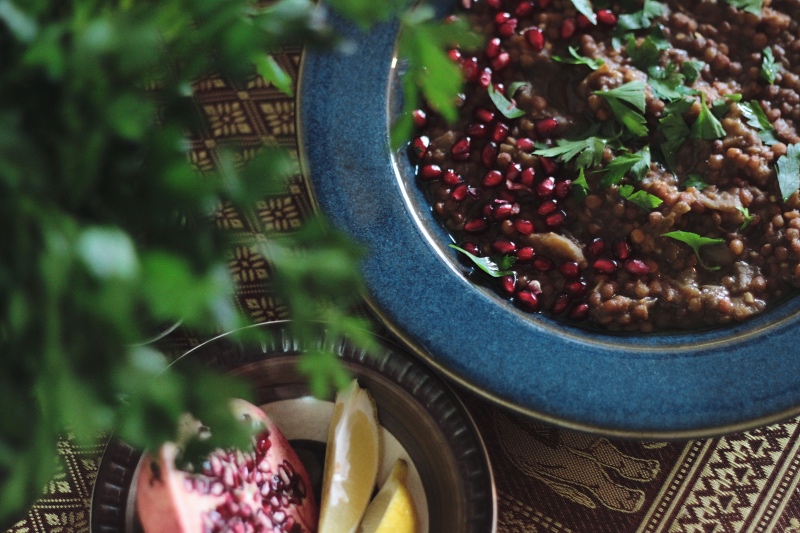 This was the second time I had made the recipe. The first time was a complete disaster, probably caused by a misprint in the original source, which calls for 150ml pomegranate molasses. This rendered the dish inedible due to mouth-puckering sourness, so the second time around I reduced the quantity to a mere two tablespoons (30ml). I’m glad I persisted because at this quantity (with increased aubergine and slightly less salt), it made perfect sense. The stew is light, fresh and comforting, with a flavour so mesmerising that it is difficult to believe that it’s made with such humble ingredients.

On gloomy Wednesday my freshly cooked Rummaniyeh went down so well with a hunk of flatbread and a glass of red wine. On stormy Thursday, when we were sent home from the office at 9am due to safety concerns, another bowl warmed my stomach as I monitored newscasts and waited to hear that friends and colleagues were safe. It was hardly chilly during the Cyclone (in fact Brisbane continued to steam with the increased humidity) but Rummaniyeh  was the ideal psychological fit; a nourishing dish for unsettled times, for stormy days, the waning sun and the promise of cold days ahead. 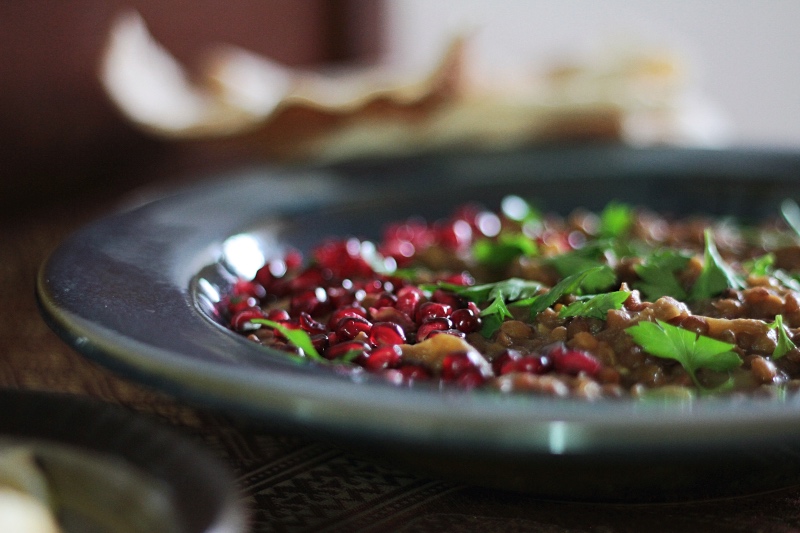 A few notes for the cook: choose lentils that will hold their shape somewhat after cooking. I was able to find Persian red lentils at my local deli, but brown or green lentils should also work. You don’t need to soak the lentils before cooking, but I like to do this anyway (for 3-4 hours) to help increase their digestibility. Don’t be tempted to skip the pomegranate seeds. Yes they are ridiculously over-priced, but these ruby nuggets provide little bursts of juicy tartness that elevate the dish from good to incredible. Good olive oil drizzled generously over the top is another key to the utter deliciousness of this stew. The stew is traditionally served with taboon or khubez bread, neither of which are readily available where I live. I used Lebanese flatbread instead and one day I might try this recipe for taboon bread.

My very best wishes to everyone in Queensland and New South Wales as the clean up from Debbie begins. If you would like to support Queensland communities impacted by the Cyclone, you can donate here.

Adapted from Joudie Kalla via The Guardian

Wash the lentils well using the technique described here, then soak them for a few hours if you wish.

When ready to cook, put the clean/drained lentils in a saucepan along with the cumin and water. Cover and bring to the boil and simmer for 10 minutes. Add the chopped aubergine and two teaspoons of salt, then leave to simmer for another 25 minutes.

While the lentils and vegetables cook, chop the garlic and then heat the olive oil in a small pan over medium heat. Add the garlic to the hot oil and cook for a few minutes until it begins to turn golden. Pour the oil and garlic into a small bowl and set aside to cool.

When the lentils and aubergine have cooked for 25 minutes, add the fried garlic and pomegranate molasses, stir through and cook for another 5 minutes. In a small bowl mix the cornflour with the juice of one lemon and then add to the lentils. Stir through until the sauce has thickened. Taste the lentils. If you would like a more sour flavour, add the juice of the second lemon. Adjust the salt at this time too, adding up to a further teaspoon until the flavour tastes right to you.

Ladle the lentils into a serving dish and drizzle generously with extra-virgin olive oil. Remove the seeds from the pomegranate by slicing it in half, then holding each half upside down as you slap the outside with a wooden spoon. The seeds should release and rain down onto the awaiting lentils (remove any bits of white pith that become detached). Scatter over the chopped parsley and eat with hot flatbread of your choice.