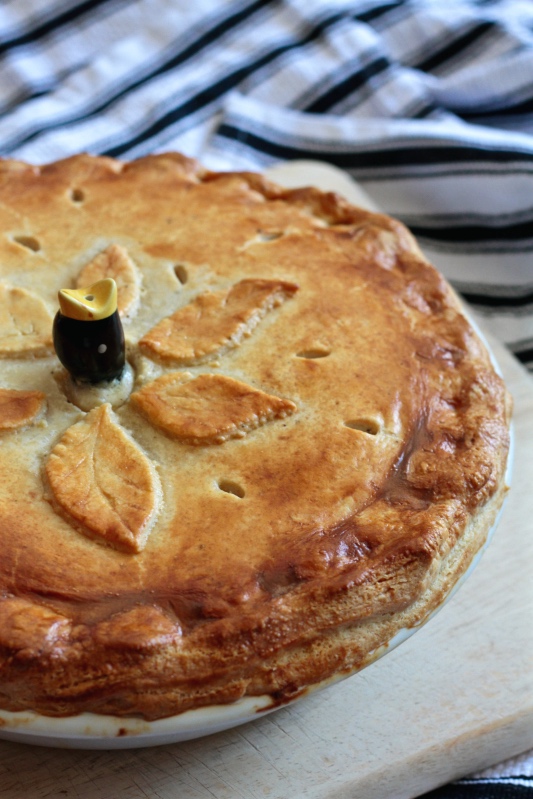 The idea of Chicken Pie has been on my mind for a while. It started when Lucy posted this photo of a gorgeous pie – complete with beautifully puffed pastry and bespeckled ceramic bird – her planned Christmas lunch all the way back in December 2013. Then two years later my sister gave me the most adorable little pie funnel: a blackbird with a bright yellow beak. It simply begged to be baked in a pie, but you know, I like to take my own sweet time with some things.

Lucy’s image was compelling because it conjured memories of the chicken pies I ate with Colin many years ago; caught up in what passed for love, sweet young things that we were. For a while we had the habit of piling into Colin’s first car (a Mark V Cortina) and driving to the coast to buy pies from Cable Bay dairy. Colin favoured smoked fish pies but I always bought the outstanding chicken pies, with their velvety cheese sauce and tender chunks of meat. We ate them out of white paper bags, sitting in the car overlooking the beach with the sound of seagulls swirling. Maybe it was the first, tantalising glimpse of adulthood that made them taste so good, but they are still the best pies that I’ve ever eaten.

So many recipes for Chicken Pie have been considered and discarded. Carrots and peas have no place in the chicken pie of my dreams, shortcrust pastry would be wrong (and so sad) here, and what is this obsession with “lightening” everything? It’s a PIE! Give me all the butter and cream, make my pastry flakey and golden, let it be luscious and comforting and just once let me re-live my youth! Finally, and with great relief, I spotted a recipe for Ultimate Chicken Pie in a recent Jamie Oliver magazine. It involved a spectacularly decadent sauce and homemade puff pastry(!), which I had never made before. Here was a chance to relive my teenage pie memories and learn a new skill! Tingles. All. Over.

The Easter four-day weekend was the chosen scene for my labour of love, and (spoiler alert) what a labour it turned out to be. It was so time-consuming, tedious and frustrating that I’m still saying to people, “I’m glad that I had the experience“, just to make myself feel better about losing two days of my life to this pie. What follows is less of a recipe and more a demonstration of how stubborn and stupid I can be when I set my mind to something. It’s about recording what happened for the sake of prosperity, because I am never, ever making this pie again. 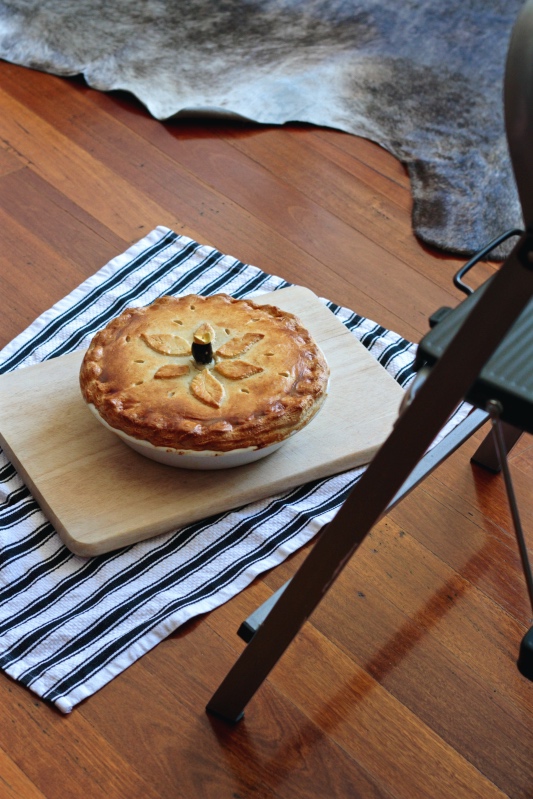 1 rose-tinted memory of Chicken Pie
1 recipe for Ultimate Chicken Pie
16 cups of single-mindedness
1 neighbour to lend you the flour that you forgot to buy
1 friend to help roll the pastry
2 days free of commitments
3 bottles of wine
Coffee, strong and bottomless
To serve: a plate, fork and a couch (you’ll be too tired to set the table, let alone make a salad)

Start by luring friends to your house with the exciting promise of homemade chicken pie for dinner. This is going to be epic!

First, poach a whole chicken in a deep saucepan, surrounded by chopped celery, onion, carrots, leek, garlic, thyme and peppercorns, and covered in cold water. Bring to the boil slowly, over a low heat. After simmering for 40 minutes, switch off the heat and let the contents cool in the liquid for as long as you can bear it, or for a minimum of 2 hours. Remove the vegetables and throw them out. Remove the cooked chicken to a plate, separate the flesh from the bones and discard the skin. Place the bones back into the cooled stock and simmer for another hour. Remove the bones and discard. Strain the stock into a clean saucepan. Bring to the boil and simmer until the liquid has reduced to 750ml, which takes, yes, another gloriously long hour. Leave to cool.

Realise that even though six hours have passed, you’ve only made one full component of the pie (cooked chicken) and one part component (the stock for the sauce). Feel overwhelmed. Sit outside with your friends and have a glass of wine (ok, it’s probably your third by now if you’re being honest).

If you’re clever (and you know that you can be), you will have saved some time by making the pastry while you prepared the stock. First beg 250g flour from your neighbour and then mix this with finely grated parmesan (50g), 1 tsp mustard powder, salt and pepper. Pastry has an obscene amount of unsalted butter in it (150g), which makes your heart sing. You cube the chilled butter, rub it into the flour a little, then use a knife to mix in 125ml cold water and 1 tsp apple cider vinegar. The recipe says “don’t over-mix”, and you don’t (winning!). You gather the lumpy pastry into a ball and chill it for 30 minutes. With the help of your friend, you roll and fold and roll and fold and chill for 30 minutes…and then repeat twice more. Thank goodness for the alarm feature on your phone, because two bottles of wine are gone and this pastry is some technical shit. You guys need to be kept in line.

Eventually, the pastry is done and the stock is done, but everyone got sick of waiting and ate bits of this and that hours ago. No-one wants pie, which is just as well because there’s still the sauce and the leeks to cook and it’s all getting a bit much. Let’s just go to bed and think about it tomorrow.

The next day dawns and we are going to get this pie cooked! Open the fridge and check on the pastry. It has completely dried out and cracked (you should have wrapped it in plastic). Consider using it anyway; consider hard. Try to roll it out. It’s a lump of concrete and in the bin it goes.

Make the pastry again. Don’t think about it.

It’s not the right flour this time. Don’t think about it!

It’s time to make the sauce. Get your stock out of the fridge and notice that it’s become a quivering jelly. Feel a twinge of accomplishment for the first time since you started this damn pie. Feel that twinge disappear as you get the tarragon and realise that you’ve bought the wrong kind (it’s  the coarse Russian rather than the delicate French variety). Chop that shit anyway (2 Tbsp) and set to the side. Finely grate 150g gruyère (which is really quite a lot and finely grating takes three times as long as regular grating, so yes, you’ve just lost another 10 minutes that you can never get back).

Make the sauce by melting 50g butter in a saucepan then stirring in 50g flour until it bubbles. Spoon the jellied stock little by little into the butter and flour, whisking briskly and admiring the smooth glossiness of the sauce. When all the stock is added, stir in 2 Tbsp dijon mustard, 150g crème fraîche, that big mound of grated gruyère and the chopped tarragon. Season with salt and pepper. Taste. It’s good enough to pour all over your lover’s body just so you can lick it off.

Leave the sauce to cool down, and while you’re there, swear repeatedly at the author of this recipe because there is SO MUCH cooling and resting and half the time involved is waiting for things to sort themselves out just so that you can move on. Go to a yoga class to de-stress. Come home and make a strong coffee to give yourself the strength to carry on. You’re on the home stretch; let’s do this.

The fresh batch of pastry still needs to be rolled and folded two more times and in between it’s time to cook the leeks. Wash and trim 2 leeks and cut into 1 cm slices. Cook in boiling salted water for 6 minutes until tender. Drain and spread on a clean tea towel to absorb excess moisture and (you guessed it) cool to room temperature.

Does the pastry need rolling and chilling again? Yes. Do you need a glass of wine now? Yes, and yes, you’ve earned it.

Shred the cold chicken, marvelling at how juicy it is. Put the chicken into the cooled sauce along with the leeks. Mix together gently and voluptuously.

It is time to assemble the pie, but you’re not excited anymore: you’re a mindless automaton. Put the pie flute into the pie dish and spoon the filling around the little bird. Roll out the pastry and cut a circle that is 4cm bigger than your 24cm pie dish. Cut a small circle in the centre so your little bird can breathe. Take the scraps of left over pastry, cut them into 1cm wide strips and glue these with water all around the circumference of the pie dish – a seemingly pointless step, but of course you do it (you’ve got that good-girl complex going on). Transfer the pie lid to the pan, and smoosh the edges together to make a seal. Use any further leftover scraps to make decorations. This bit is supposed to be fun and creative, but your eyes are glazing over. You form a few crappy leaves and slap them on. Part of you is thinking, why leaves on chicken pie? Why not a little pastry chicken? Oh, too much reality maybe? Just stop. Have some more wine.

The pie is assembled, but don’t get too excited. It needs to be brushed with a beaten egg and chilled in the fridge for 20 minutes. While that’s happening, heat the oven to 180°C / 350°F and start to clean up. You’ve used every single pan and spoon in your kitchen, so this is going to take a while…la la la la…

Bake the pie for 40 minutes, except of course your pie needs much longer (nearly double) to cook the pastry properly. You’re worried that the top of the pastry might burn so you fuss around with an aluminium foil tent (more faffing, but this is not the time to give up).

It’s done, or done enough. Take the pie out. Your husband immediately wants to ruin the beautiful veneer of your pie by tearing off a chunk of pastry. You get it; it does look delicious, but that is NOT HAPPENING and hasn’t he noticed what you’ve been through? Give him “the look” (the testicle-shrivelling death-stare) until he backs down.

The verdict: it’s not even close to your memory of ultimate chicken pie. Sure, it’s pretty f-ing good, but not “two days of pain” good. You’re over it. You eat, with abandon, knowing that you’ll never, ever taste this pie again.